Confirmed: it really is about class warfare 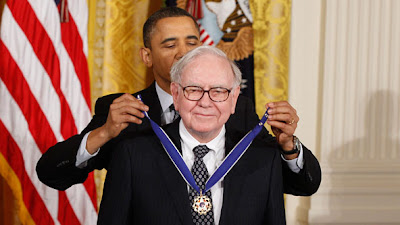 We knew it all along, however, credit them for their honesty but the White House finally admitted that higher taxes on the rich via the Buffet rule has nothing to do with deficit reduction or paying down the debt.

Introducing a minimum 30 percent income tax on millionaires “was never our plan to bring the deficit down and get the debt under control,” Jason Furman, the principal deputy director of the White House National Economic Council, told reporters on a conference call Monday afternoon. “This is not the president’s entire tax plan. We’re not trying to say this solves all our economic problems, all our budget problems.”

Making the argument for the rule based on billionaire investor Warren Buffett’s argument that it’s wrong for him to pay a lower tax rate than his secretary, President Barack Obama said in the State of the Union address in January that paying the “fair share of taxes” was necessary for a “sense of shared responsibility. That’s how we’ll reduce our deficit.”


If the President is going to keep trotting out the ridiculous "Buffet rule" chimera, we're going to keep knocking it down... with joy in our heart and a smile upon our face.

Buffet receives most of his income from capital gains which is taxed at 15 percent which is far lower than the highest income tax rate. So, Buffet could simply grant himself, say, a salary of $1 million, thus paying more in taxes and he and the President could quit making clowns of themselves. But, no, Buffet is a) acting in his best rational self-interest by shielding as much of his income as possible from taxation and is b) allowing himself to be a pinata for the benefit his BFF's re-election campaign.

Sen. Orrin Hatch (R-Utah) slammed the bill late last month, after the congressional Joint Committee on Taxation estimated the rule would generate $46.7 billion in revenues over the next decade.

“It was designed for no other reason than politics — there is no economic rationale for it,” Hatch said in a statement. “I hope the president will stop the class warfare and start leading by putting out real proposals to bring down our debt.”

But in the Monday conference call, Furman said that sum wasn’t too shabby.

“We think $47 billion is a meaningful amount of money to most Americans,” he said.

$47 billion sounds like a big number until you realize that is the alleged revenue generated over 10 years and with the way Obama spends money, that represents less than one percent of the $6.4 trillion in projected deficits during that same time period.

So, yeah, better stick with the "fairness"/class warfare angle because the numbers are laughable.