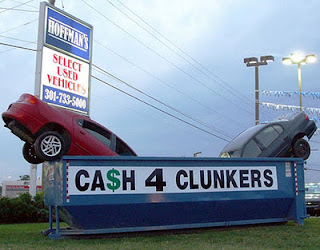 ... who's paying any attention to the war on the poor?


Alternate headline: Doubling down on stupid


We have previously made note of what a disaster the administration's Cash for Clunkers was as $3 billion dollars to goose demand for new cars took perfectly fine-operating used cars off the market which had the obviously predictable results of raising the price of existing used cars which made them less accessible to lower income folks and charities who would be in the market for the same.

In case anyone wondered, cars are important:


For more than a century, efforts to help the disadvantaged have focused on education, healthcare, nutrition and housing. Almost nothing has been done to help the working poor afford cars, despite research that indicates it would help alleviate poverty.

About 1 in 4 needy U.S. families do not have a car, according to the Annie E. Casey Foundation. That's a serious handicap for the millions of Americans who don't have access to robust mass transit.

A nationwide survey of 353 people who bought cars with help from a nonprofit group called Ways to Work found that 72% reported an increase in income. Of those who were on public assistance when they acquired a car, 87% were no longer receiving it a few years later.

Other studies have found that low-income people were more involved in community activities and had better access to healthcare after getting cars, while their children participated more frequently in after-school programs.

"You're more likely to have a job and less likely to be fired," said Evelyn Blumenberg, a professor of urban planning at UCLA who studies transportation and poverty. "It's just a no-brainer that low-income families need cars."

Yet there are almost no state or federal programs to meet the need.

Let that sink in for a moment. It's not necessarily that there is no federal program in place to meet the car needs of the poor, there was certainly a program that resulted in worsening this scenario in Cash for Clunkers.


And the situation is not going to be getting any better.

“While you can mandate what automakers must build, (ed. note: a dubious assumption, at best) you can’t dictate what customers will buy, nor can you dictate if a bank will make a loan,” New Mexico Ford dealer Don Chalmers said today.

Obama's proposed CAFE standards, which will begin taking effect in 2017, raise minimum average vehicle fleet fuel efficiency to 54.5 mpg by 2025. The Environmental Protection Agency and National Highway Traffic Safety Administration estimate that this regulation will raise the average price of passenger cars and light trucks by $3,000.

“The unintended consequences of the proposed fuel economy increases are clear,” NADA Used Car Guide analyst David Wagner said. “If the price of a vehicle goes up by the government estimate of almost $3,000, millions of people will no longer be able to finance a new vehicle.”


This isn't rocket science, gang. If you are going to start mandating increases in technology outside of market demand, that is necessarily going to have an effect on the price of that technology.

The very class of people statist claim to champion are getting screwed by statist policies. Again, even that, as we have seen over the years isn't rocket science.