Alright my team of tasters, I know I said that I was going to talk
about my final day in San Francisco today but upon further
consideration, I’ve decided to spare you all with another braggadocios,
self-aggrandizing post on how good of a time I had in my favorite
little city, and instead I’m heading back into my top 10! It’s been
a while since I’ve hit the list so that’s what we’re gonna do here
today. Sound good? Great! Then let’s do this!

I briefly touched on this beer in my review of Toronado San Francisco
but, seeing as though its summer, decided now is the time to delve
into this tasty brew in greater detail. Reality Czech from Moonlight Brewing out of Fulton, CA is the perfect example of a Czech style Pilsner. Not, in my opinion, just factually. Ok, maybe in my opinion, but really it is a perfect Pilsner.

Let’s back it up a little and talk about Moonlight Brewing, first.
Moonlight is located in a sleepy little wine town located along
Highway 101, half way between Santa Rosa and Healdsburg in the heart
of Sonoma wine country. In its original state, Moonlight was brewed
out of a converted farm by its founder, Brian Hunt (pictured), in 1992, who also did all of the distribution, delivery, sales, kegging, bottling,
cleaning, and sanitizing as well as dealing with most of the finances.
Yes, he is a bad ass. 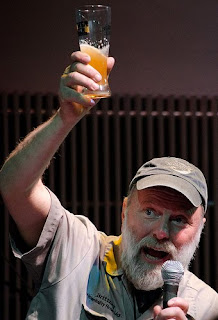 In 2003, they opened up a small warehouse where
they now have a 1000 barrel system (which is pretty damn small) even
further out in the boonies. And yes, other than the random hick that decides he wants to “help out” for some free booze, Brian Hunt STILL
runs the show by himself. WHAT A BAD ASS!!!! This does mean that
from time to time you’ll come across a keg that just isn’t right, but
when it is, boy, is it worth it. They have three flagship beers
including Death and Taxes, a 5% Euro Dark Lager, a sessionable
Scotch Ale in myopinion,Bombay By Boat which is a 5.9% mild IPA (not as hoppy as I would have liked,) and a beautiful, fruity/floral Pilsner coming in at 4.8% called REALITY CZECH!!!!

Have you ever been outside at a BBQ on a scorching day and longed for
the one beer to quench your thirst, only to have the lame host of the
party offer you a Coors Light instead? Well forget that party and
come to my ‘Q’ where I’ll be serving up the best light beer in the
entire freakin’ planet. Ok, in my dreams but you’re pickin’ up what
I’m puttin’ down, ya? Take nectar straight from the gods, mix in some
flowers from Dionysus and some fruit from Eve and we’re on the right
track. The best thing: This beer is only 4.8%! Which means that you
can drink just as many as you could a BL, CL, MGD, Bud, or whatever
else in God’s green Earth you people are drinking. Sign me the freak
up, baby!


Seriously though, this beer has a very pale golden hue to it, similar
to the aforementioned crap beers out there, only this tasty cerveza
has something they don’t… TASTE! FLAVOR! A certain “je ne se qua”
that literally means you just can’t explain what it is about it that these others don’t. Its floral notes hit you on the nose with subtle flutters of
rose and the body has a slight fruit flavor that makes your tongue
sing. The finish has that perfect bitter finish that a Czech style
Pilsner is supposed to have only it lasts longer and retains some of both
the floral and fruity qualities from the nose and body. In other
words… YES PLEASE AND THANK YOU! MAY I HAVE ANOTHER?!??!?!!

So if you’re in the bay area, East Bay, Santa Rosa, Santa Cruz, or
even San Diego and are blessed with a beautiful, warm day on a patio
with Reality Czech on draft don’t make other plans. This beer is what
you want and the day will slip into a slightly hazy delight that won’t
soon be forgot. Damn, I want one right now! How do I make this
happen?

So, the lesson for the day: Czech out any of the beers that Moonlight
has to offer if you are afforded the chance, and if you can find any
of their bottles please send one or 50 to me! I will return the favor
in spades. You know how to reach me in the mean time, via email,
Facebook, Google Plus is now available, as well as the comment
section below.

Until next time my beer loving brethren, have a beer for me (and make
it a Reality Czech!)


Admittedly, we have never had Reality Czech but would we distrust Max? Never. We know its wine country but wouldn't a beer-tasting trip up there be pretty epic? Bear Republic (Santa Rosa), Lagunitas (Petaluma), Russian River (Santa Rosa) and Moonlight (Fulton) are all a stone's throw from another. A SR 116 brewery tour! Hmmmmm....

Ever tap any of this lusciousness at Hoffs???