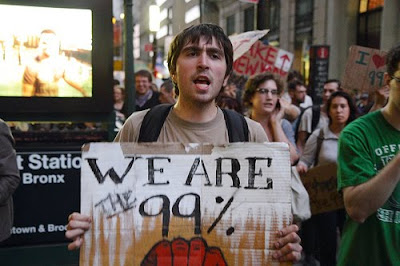 A few thoughts on the Occupy Wall Street movement...


As we wrote yesterday, we are sympathetic to some of the gripes that appear to be central to the Occupy Wall Street's message as they parallel our opposition to the bailouts and corporatism/crony capitalism that have been the business as usual of both the Bush and Obama administrations. However, there is a latent anti-capitalism that informs the movement by which we cannot abide.

And what may have been a well-intended grass roots movement by a very loose collection of liberal-leftists, anti-Fed populists and anarchists rallying against Wall St. "greed" is morphing into a somewhat organized distraction from the spectacularly failed statist domestic policies of the Obama administration. There is evidence that MoveOn.org is attempting to co-opt the movement.

After largely staying out of the protests thus far, “MoveOn.org is expected to mobilize its extensive online regional networks to drum up support for the effort,” reports Crain’s New York Business.

The Obama front organization has supported the demonstrators by way of its website coverage, but this marks the first time that MoveOn will actively engage to organize ‘Occupy Wall Street’ events which its members will attend.


As for the opinions of those in the movement itself, Adam Kokesh talks to a few occupiers in D.C. and as you'll see there isn't much of a coherent theme as to what the occupiers actually want done, although Kokesh seems just as intent in getting his point of view across as he is in allowing the occupiers to express their opinions.

We will credit Kokesh, however, at the 7 minute mark for attempting to address the role of the government in the crony capitalism equation that always seems to go missing in rallies and protests of this nature. Occupying Wall Street is fine but doesn't it stand to reason that you should be doing the same on Capitol Hill and in front of the residence of the biggest crony capitalist around at 1600 Pennsylvania Avenue, Washington D.C.? One doesn't get the feeling, however, that any of the people interviewed won't be voting for Obama in 2012.

And then there was this:

The zeal for totalitarian government amongst some of the “protesters” is shocking. One sign being carried around read, “A government is an entity which holds the monopolistic right to initiate force,” which seems a little ironic when protesters complain about being physically assaulted by police in the same breath.

One sign to be sure but the one gentleman in the overcoat in the video seemed to hedge towards this philosophy and as we saw during the debate over ObamaCare, the reigning-in of the power of government just ain't what it used to be for liberals.


So, are the people that are part of this movement taken aback by what appears to be a high-jacking of this movement by a Democratic front group or are they totally cool with being co-opted and being used as campaign tools for the re-election effort of the Corporatist-in-Chief.

It makes perfect sense for the President to not only welcome this Occupy Wall St. movement diversion but to get one of his front groups to start pulling the strings behind the scenes. After all, his jobs bill, which is a re-hash of the failed Porkulus bill of February 2009, is DOA as there are not even enough votes in the Democratic-controlled Senate and majority leader Harry Reid has come out and said that the jobs bill that absolutely has to be passed now! will be taking a back seat to more pressing legislative matters.

So, after all that, for the smartest man ever to be elected President, demagoguing the rich and demonizing Wall Street by proxy is all he's got left.

BwD: Here is some additional background -- many of the NYC protesters were told there was a free Radiohead concert. Now, music died for me the day Duran Duran split up, but I am given to understand Radiohead is popular among the age-set protesting Wall Street. Needless to say, the free concert was a hoax and the youthful energy channeled to the march. As a bonus, it seems concert fake-outs to draw large crowds is a hallmark of Organizing for America. I suspect they hope this becomes a more successful version of the "Coffee Party."

This is going to bite Democrats in the ass, particularly if it grows violent.

The calculus of this is pretty interesting. The two co-chairs of the Congressional Progressive Caucus have given their blessing but all the other Dems are holding out to see where this is all going and to see if they can co-opt it without getting bit by the kook factor.

I think, however, you may be right. Aging hippies and Che' t-shirt wearing suburbanites all guided by the professional Left does not usually provide good optics for the broad middle of this country's electorate.