Yet another green technology (overseas) boondoggle 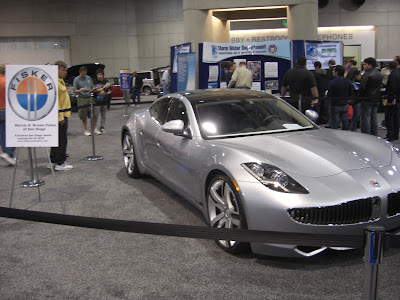 
On the bright side of things, we guess we should be thankful that they have not yet gone out of business like Solyndra or are massively in debt like SunPower.

With the approval of the Obama administration, an electric car company that received a $529 million federal government loan guarantee is assembling its first line of cars in Finland, saying it could not find a facility in the United States capable of doing the work.

Vice President Joseph Biden heralded the Energy Department's $529 million loan to the start-up electric car company called Fisker as a bright new path to thousands of American manufacturing jobs. But two years after the loan was announced, the job of assembling the flashy electric Fisker Karma sports car has been outsourced to Finland.

"There was no contract manufacturer in the U.S. that could actually produce our vehicle," the car company's founder and namesake told ABC News. "They don't exist here."


This really is old news as this loan to Fisker and the fact the cars would be built over in Finland was reported out on these very pages over two years ago..


And political connections, you ask? But, of course:

The loan to Fisker is part of a $1 billion bet the Energy Department has made in two politically connected California-based electric carmakers producing sporty -- and pricey -- cutting-edge autos. Fisker Automotive, backed by a powerhouse venture capital firm whose partners include former Vice President Al Gore, predicts it will eventually be churning out tens of thousands of electric sports sedans at the shuttered GM factory it bought in Delaware. And Tesla Motors, whose prime backers include PayPal mogul Elon Musk and Google co-founders Larry Page and Sergey Brin, says it will do the same in a massive facility tooling up in Silicon Valley.


And proving just how affordable green technology is becoming, the reported prices for those cars two years ago was $89,000 and $40,000, respectively.

And here's what was said with respect to the prices of the cars at the time (link above):

The Karma will target an exclusive audience -- Gore was one of the first to sign up for one. Mr. Fisker says all new technology starts out being expensive. He pointed to flat-screen televisions that once started at $25,000 but are now affordable to the mass market.

It’s not entirely clear to us that $40,000/unit falls under the mass audience category but who the hell cares about the masses when one of the main beneficiaries of your largesse has dutifully signed up to have that thing sit in his driveway?

Think about it: billions upon billions of dollars in subsidies and the prices are going in the wrong direction unlike other areas of the tech sector (TVs and cell/smart phones) where no subsidies were received and real skin was in the game and the market determined the winners and losers.

Federally-subsidized green technology: Rising consumer prices, shipping jobs out of country and hooking up your buds... What's not to like about that?


* The Karma, Fisker's luxury sedan at the San Diego Auto Show in December of 2009. Yep, Karma's a bitch.