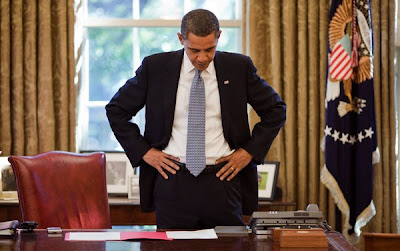 Here's the President earlier today in Shaker Heights, Ohio defending his (not in) recess appointments of 3 members of the National Labor Review Board:

But when Congress refuses to act, and as a result, hurts our economy and puts our people at risk, then I have an obligation as President to do what I can without them. (Applause.) I’ve got an obligation to act on behalf of the American people. And I’m not going to stand by while a minority in the Senate puts party ideology ahead of the people that we were elected to serve. (Applause.) Not with so much at stake, not at this make-or-break moment for middle-class Americans. We’re not going to let that happen. (Applause.)

No he doesn't. No, he absolutely does not ahead of an obligation to the Constitution.

Fancy that: Our constitutional scholar forgot about that whole obligation to the Constitution thing. He took an oath to uphold it or something.


However, considering how we led from behind in our efforts to protect civilians from wartime atrocities... take out military targets... whack the leader of a sovereign nation that posed no threat to us without Congressional authorization, this whole issue of a few (not in) recess appointments is kind of small potatoes but potatoes they are.


We didn't think we would have to update so soon but we fear we would start running behind if we waited too long.


A crowd favorite we're disappointed to announce but here it is... the O > W boogaloo jambaroo:


* Signing legislation that would allow the military to indefinitely detain terror suspects, including American citizens arrested in the United States, without charge. Got 4th amendment? Not anymore, you don't. *

Share it. Share it, brothers and sisters with friends, family and particularly all those alleged Bush-hating Obama supporters to see who it is are the hypocrites in your life.

Yes the pot is calling the kettle black. Honestly, I'm surprised by how much attention this story has been getting both in the national media and on Conservative blogs.

Some are calling for impeachment over this.

I'll take your word on the impeachment thing but I'll just settle for the unelected thing.