What you are seeing right now is not happening (UPDATED)

(Please scroll down for update)

Apparently, we can wait.


From the National Journal:


In a decision that quickly re-ignited a fierce energy debate, the Obama administration on Wednesday rejected the controversial Keystone XL pipeline because the 60-day deadline imposed by Republicans did not allow adequate time to review an alternate route through an ecologically sensitive area in Nebraska.

Deputy Secretary of State William Burns made the announcement on President Obama's behalf on the project that would carry oil from Canada's carbon-heavy tar sands to refineries on the Gulf Coast. TransCanada, the company seeking to build the $7 billion, 1,700-mile pipeline, will be able to reapply with a new route avoiding an ecologically sensitive area of Nebraska, sources told National Journal.


For those of you scoring at home, our ruling class is perfectly willing to sink $120 billion of tax-payer dollars that we do not have into a transportation system that is slower than the existing transportation system (commuter flights) yet is unwilling to allow a privately funded infrastructure project that will transport a proven energy resource from a friendly neighbor versus paying ass-a-holic regimes like the Saudis or Venezuela for the same thing. 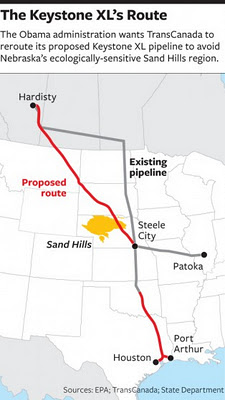 Next they'll tell us that State Route 2, US 20 and the cities of Alliance, Valentine and Thedford simply don't exist.

Experiencing the extremes of weather conditions both in the summer and winter (all seasons, as a matter of fact), we find the excuse of "ecologically sensitive" in an area smack dab in the middle of a large continental land mass which has already been trod upon by human existence to be somewhat dubious.

(UPDATE #1): Here's what passes for sound economics for the President:

President Obama said that he will delay his vacation and keep Congress in session until the passage of his desired payroll tax cut and unemployment benefits extension -- two proposals that Obama said would create more jobs than the Keystone XL pipeline that his administration recently delayed.

"I would not ask anyone to do something I'm not willing to do myself," Obama said when asked if he would go on vacation while keeping Congress in Washington D.C. "We are going to stay here as long as it takes [to get unemployment extended and pass the payroll tax cut]."

As Obama called for passage of those bills, he also responded to a recent Republican push to require him to approve the construction of the Keystone XL pipeline from Canada. "However many jobs might be generated by a Keystone pipeline," he said, "they're going to be a lot fewer than the jobs that are created by extending the payroll tax cut and extending unemployment insurance."

The food stamp President and who he has surrounded himself actually believe an indicator of economic success/recovery is how effectively they are able to issue unemployment benefits. This is by no means a gaffe or a one-off as we have run across numerous examples of back-slapping by the administration regarding the job creation and multiplier effect of food stamps and unemployment bennies.

Is it any small wonder then, why it is this recovery has been so sluggish and long in the making?

China is much more concerned with the environment than we are.

This is an almost criminal act. If oil pipelines are so dangerous how come we never hear about them bursting in Alaska?