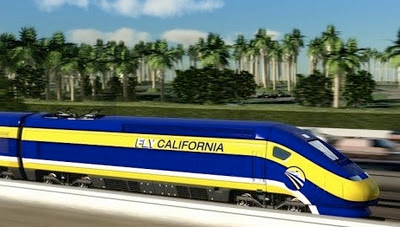 In the middle of an article comparing Spain's high speed rail system and California's in today's San Diego Union-Tribune was the following paragraph:

It's in dispute whether the rail line even brings in enough money to pay for its operating costs -- as California has promised to do. Still, Spain plans further spending, although the economic downturn and the addition of some unsuccessful lines may slow that down.

Why is it in dispute? Would the question of a private enterprise like Exxon-Mobil or Barnes and Noble being able to cover their operating costs ever be in dispute?

And that's part of the problem with massive public works projects like California's proposed high-speed choo-choos. Whether or not the system will be able to generate the ridership to cover operating costs will always be in dispute as long as the actual operating costs are masked by layers and layers of tax-payer subsidies as will most likely be the case here.


And here's Walter Russell Mead chiming in on high-speed choo-choos:

California’s bullet train is going off the rails, and the overseers are running for cover. The WSJ reports that Roelof van Ark, the chief executive, and Thomas Umberg, the chairman of the High Speed Rail Authority, announced they will step down from their posts as the odds against the project grow longer.

The highly indebted, cash strapped state has commitments of $3.3 billion of federal money in hand against the roughly $100 billion that the train is now estimated to cost (the price will certainly go even higher). Voters authorized almost $10 billion in bonds in a referendum, but that was when the train looked much cheaper and more federal funding was available. Since then the cost estimates more than doubled to $99 billion, ridership estimates have been slashed indicating that the completed system will require unending subsidies, and Congress has stopped voting new funds for high speed rail.

To make matters even worse, the federal funds that are available can only be used for a “spur” out into the Central Valley, rather than the main line from Los Angeles to San Francisco. The “spur” is the least needed, least wanted and least useful part of the system and will never generate significant traffic. There are, in other words, federal funds to help with the part of the system that nobody really wants, and the heavily indebted state must find at least $70 billion to fund the rest.

(Please click to enlarge. Note that cost estimates you hear for the system do not even include the cost of extending the rail past Orange County and down to San Diego.)

Yet against every sober assessment of the high-speed rail system, Governor Jerry Brown has damned the torpedoes and is full-steam ahead towards political suicide and the fiscal ruination of California in order to stay in the good graces of a progressive coalition consisting of the Obama administration, construction labor unions, environmentalists and big city mayors.

We don't want to build a privately-funded pipeline that will bring a proven energy source from a friendly country and which will create thousands of construction jobs but we have a ruling class that is more than willing to sink upwards of $120 billion of tax-payer money on a train to nowhere.

This fascination with high speed rail is weird.