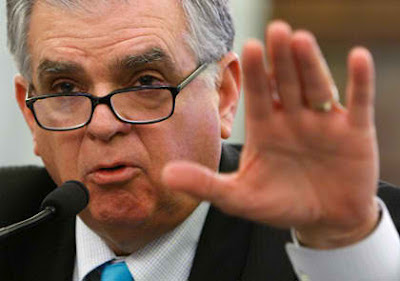 One in a series where we call out the ignorant, feckless and malevolent enemies of the Republic.


Ray LaHood is not fit to serve as this nation's Transportation Secretary as per Ray LaHood himself as will be ably demonstrated in the following paragraphs:


Echoing the laments of pundits like Thomas Friedman of the New York Times, U.S. Transportation Secretary Ray LaHood argued Saturday that China outpaces the United States in building major transportation infrastructure like high-speed rail because of its authoritarian system and because the Chinese don't have the Republican Party holding up progress.

"The Chinese are more successful [in building infrastructure] because in their country, only three people make the decision. In our country, 3,000 people do, 3 million," LaHood said in a short interview with The Cable on the sidelines of the 2012 Aspen Ideas Festival on June 30. "In a country where only three people make the decision, they can decide where to put their rail line, get the money, and do it. We don't do it that way in America."

That is what apparently passes for an "idea" at this Aspen Ideas Festival which, coincidentally enough, is host to a film festival prone to the same sort of revolutionary ideas.

And, as if LaHood remembers that people might actually re-print his words, he gets back on the democracy reservation.

LaHood said that despite this, democracy is still preferable. "We have the best system of government anywhere on the planet. It is the best. Because the people have their say," he said.

Before promptly wandering back off, again.


During his conference session at the festival, LaHood blamed Republicans in Congress, especially the Tea Party freshman class elected in 2010, for the relative lack of progress in moving forward with high-speed rail even though the administration has obligated more than $11 billion to the effort.

"Two years ago, between 50 to 60 Republicans were elected to the House of Representatives to come to Washington to do nothing, and that's what they've done and they've stopped any progress. Those people don't have any vision about what the government can do. That's been a real inhibitor in our ability to think outside the box and think big," he said.

We'd like to take this moment to recognize the Democrat-controlled do-nothing Senate that hasn't produced a budget in over 3 years and its do-nothing majority leader, Harry Reid, who refuses to take up the 15-20 jobs-related bills that have been sent over from the House in the past year and a half.

And likening his vision for what a government can do to one that enforces a one-child policy via forced abortions and sterilizations cements LaHood's hack status within the administration and proves, with LaHood being appointed Transpo Secretary by G.W. Bush, that sad-sack statist thinking cuts across party lines.


LaHood boldly predicted in his remarks at the conference that 80 percent of Americans will be connected with passenger rail within the next 25 years. He said that this will be accomplished through a series of commitments by the federal government, state governments, and the private sector.


LaHood heavily criticized the governors of Wyoming and Florida, who have rejected federal attempts to move forward with high-speed rail in their states, and he fought off a heckler from California who said that high-speed rail was not a wise investment of taxpayer money.

High speed rail in Wyoming... let that image sink in for a moment.


More from this clown:

"Doing nothing is not acceptable. Don't be coming here and telling me it's not acceptable if you don't have an alternative. It's coming to California," LaHood exclaimed. "All the studies show, if you build it they will come."

Another lesson in constitutional republics: in a political vacuum, doing nothing is neither acceptable nor unacceptable. Given the context and in this current environment, however, we happen to think that doing nothing is infinitely more acceptable than the alternative but Roy doesn't like that so he's going to whine about the checks and balances, separation of powers and our system of electoral politics that were built into the constitution.

Memo to Ray LaHood, you petulant, whiny-ass, little brat: go out and campaign for your side, make sure the President gets re-elected and take back the House so you can get as close to the one-party bliss of China that is legally allowed in this country and then you can build your g-dm'd high speed choo-choo system out in the wilds of Wyoming with money we don't have and for a people that don't want it.

But nobody would be that stupid...

I'm still stuck on Aspen...Idea...Festival. Just sounds like someone got punked.