Hey, why am I stuck over here on the left side of this post? 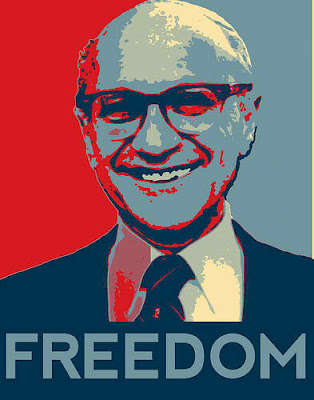 We've never put together our definitive list but I think it might be safe to say this guy makes the 3-people-as-dinner-mates-list cut.


Happy 100th birthday to a man who is our favorite economist and one of the great quote machines of all time.

Here are just a few of our favorites:

. Industrial progress, mechanical improvement, all of the great wonders of the modern era have meant little to the wealthy. The rich in ancient Greece would have benefited hardly at all from modern plumbing - running servants replaced running water. Television and radio - the patricians of Rome could enjoy the leading musicians and actors in their home, could have the leading artists as domestic retainers. Ready-to-wear clothing, supermarkets - all these and many other modern developments would have added little to their life. They would have welcomed the improvements in transportation and in medicine, but for the rest, the great achievements of western capitalism have rebounded primarily to the benefit of the ordinary person. These achievements have made available to the masses conveniences and amenities that were previously the exclusive prerogative of the rich and powerful.

Think of how much has changed in our lives since the advent and broad-based usage of the internet in the past 15 years. And to think that all the first cell phones could do back in the 80s was make phone calls. Shoot, when was the last time you actually made a phone call on your smart phone?


. A major source of objection to a free economy is precisely that it ... gives people what they want instead of what a particular group thinks they ought to want. Underlying most arguments against the free market is a lack of belief in freedom itself.

We're looking at you, statists.

One of the great mistakes is to judge policies and programs by their intentions rather than their results.

- Interview with Richard Heffner on The Open Mind (7 December 1975)

The road to hell is paved with statist intentions.

There is no place for government to prohibit consumers from buying products the effect of which will be to harm themselves.

Free to Choose (1980), segment Who protects the consumer?

Nanny Bloomberg, we're looking at you.

Wow, so many more. You know, to hell with it. It's the guy's hundy, so we may be sharing more quotes and videos from him as the week progresses. That's how important we feel him to be.

I had the privilege of seeing Uncle Miltie speak in San Diego about 10 years ago.

Dude is right up there with Reagan, Lech Walesa, and Vaclav Havel.