What we were tweeting (yesterday)

In response to the following, an interview of the President given by CBS News where the President reflects on his biggest mistake:


"When I think about what we've done well and what we haven't done well," the president said, "the mistake of my first term - couple of years - was thinking that this job was just about getting the policy right. And that's important. But the nature of this office is also to tell a story to the American people that gives them a sense of unity and purpose and optimism, especially during tough times."


Mr. Obama acknowledged the dissonance between others' perception of his strength as an expert orator, and his own.

"It's funny - when I ran, everybody said, well he can give a good speech but can he actually manage the job?" he said. "And in my first two years, I think the notion was, 'Well, he's been juggling and managing a lot of stuff, but where's the story that tells us where he's going?' And I think that was a legitimate criticism."


Tweet: Where's the story? Dude, where are the jobs?


Unreal. Persistent unemployment. Record debt and deficits. Anemic economic growth. Unprecedented amassing of executive power. And he thinks it's all a messaging problem.


Well, thankfully, we get to see just how things might've been and may still be once the President gets his story out. 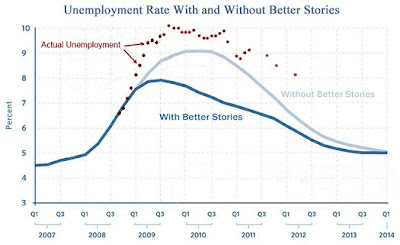