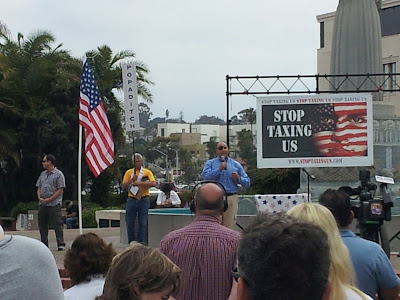 In a more perfect union, lads as ourselves would not be blogging so much on the weekend but times being as they are...


B-Daddy at the Liberator Today has an excellent run-down of the event, here and which included some ideas on how to truly reform healthcare:

1.Let credit card companies manage Health Savings Accounts (that use pre-tax dollars) because they are good at detecting fraud. Further, allowing HSAs to roll from year to year would encourage people to shop around and reduce health costs. As a current user of a flexible spending account for some of my health care, I like this idea. But, the current system pushes me to spend all my eligible funds in one year, leading to some wasteful spending.

2.Get the states and the AMA out of nursing licensing. Doctors and hospitals are capable of judging the quality of nurses, this just restricts supply.

3.Get the AMA out of limiting doctor licensing and medical school accreditation, because they have a vested interest in decreasing the supply of doctors.

We would also add that there needs to be much greater flexibility in what we do and do not want covered in our healthcare plans. Currently, for younger and/or healthier people, there is no real high-deductible/catastrophic coverage plan options (in fact, Obamatax outlaws many of these similar mini-med plans for low-wage employees). The government mandates all manner of coverage for stuff this segment of the population does not need which drives up the cost of premiums thus putting healthcare coverage out of reach.


Shane Atwell had his thoughts on the rally here which included the following:

Bilbray (the only named speaker in the announcement) started very weak by saying that everything reduces to taxes. Then the sound system cut out... After restoring the sound he continued to try to tap into Tea Party energy, but was clearly not into it. (Full disclosure: I especially dislike Bilbray for voting for every socon and neocon powergrab that's ever come before him, like the NDAA and Patriot Act. Dawn Wildman has more thoughts on Bilbray here.) One of the Stop Taxing Us co-founders spoke just before Bilbray and spent much of it restraining himself from criticizing Bilbray.

We understand that Bilbray has done much to not make himself a tea party fave but with respect to repealing the counterproductive monstrosity that is Obamatax, we need all the signatories we can muster. We don't mean to go all single issue on anybody but we can think of no greater legislative priority in the next Congressional session. If it means currying the support of a RINO-esque tea party wanna-be, then so be it.


While walking back to our truck after the rally, we reflected upon the charmed/nine lives existence of ObamaCare. Through back room bribes, arm-twisting, kickbacks and Stupaking, Christmas Eve votes and one of the greatest Supreme Court judicial dodges of all time, this thing has survived. So, this is where we are at: November 6, we've got our last at bat. It's then or never. Stay calm, stay focused and stay relaxed.

P.S. The rally was held in the shadow of this building. 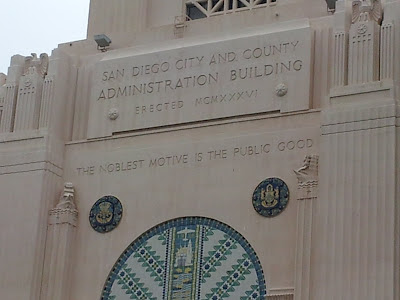 We joked with Shane that he would not approve this message.

I wish I could have gone. Argh.