Graphic image of the day 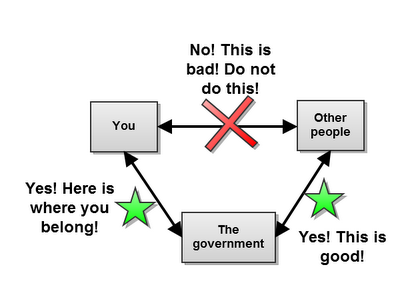 
li
Which was inspired by these words from The One at a campaign stop in Roanoke, Va., this past Friday:

If you were successful, somebody along the line gave you some help. There was a great teacher somewhere in your life. Somebody helped to create this unbelievable American system that we have that allowed you to thrive. Somebody invested in roads and bridges. If you’ve got a business -- you didn’t build that. Somebody else made that happen. The Internet didn’t get invented on its own. Government research created the Internet so that all the companies could make money off the Internet.

We're baffled. It's such a completely different mindset that frames everything in such a context. A context that even beyond paying taxes for basic government services that delivers the mail, paves the roads and defends the coast (we could go on... they sure would like to will), there can be no individual success outside that which is defined by your relation to the government.

If you doubt us, recall it's this administration that claims as a success how many people they can put on food stamps and further, how unemployment benefits are somehow an economic stimulus.

It's no wonder these people are economic illiterates when, in a sense, they are moral illiterates as well. Yeah, we said it - because a philosophy whereby individual success is defined by the extent by which the government provided it, is immoral. And fealty to anybody beyond yourself and your Creator is inherently immoral as well.

As we recall, it is a government of the people and by the people and not the other way around. They seem to have flipped the script, wouldn't you say?

I'd thank you for the link, but I've decided to contact HHS first, send them a big chunk of cash and have them thank you instead.