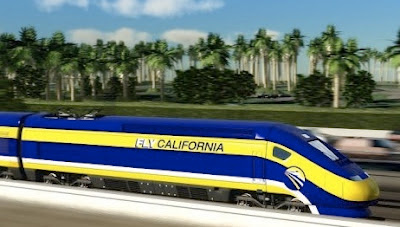 First, a seemingly unrelated bit from the biggest dingbat to ever wander the halls of Congress:

Of course, that was Speaker Pelosi who obviously had no clue herself what was contained within ObamaCare but just wanted it passed, dammit, legislative niceties, aside.


It seems not really knowing what's actually inside big, grand statist legislative schemes is catching because the affliction has appeared to hit the California high speed rail project as well.

Boston had their Big Dig and it's becoming evident the good people of San Franciso (of whom we can say: couldn't happen to a more deserving lot) have got one of their own.

From the SF Gate:


Now that Gov. Jerry Brown has signed legislation to allow the state to spend billions on high-speed rail, Bay Area residents had better brace for the real ride - a push for $650 million in toll hikes and new San Francisco taxes.

That's how much will be needed to help pay for a tunnel to connect the Transbay Terminal to the Caltrain station at Fourth and King streets.

As it turns out, none of the $2.5 billion in tunnel costs were included as part of the narrowly approved high-speed-rail deal.

It's up to the locals to make the tunnel happen. If they don't, the $68 billion high-speed-rail line from Los Angeles will dead-end several blocks from downtown proper.

Building the tunnel will put San Francisco in competition with those hoping to finish BART to San Jose - both projects will be tussling for $1.8 billion that the federal government will direct to the Bay Area in the coming years.

Just for work to start on the 1.2-mile dig through the heart of the city, however, the Bay Area has to come up with its own $650 million. The current plan is to raise $300 million from higher bridge tolls and $350 million in San Francisco sales-tax dollars.

José Luis Moscovich, executive director of the San Francisco County Transportation Authority, said city voters could be asked for the $350 million as part of an overall transportation-tax extension within the next two years.

The date for when the Legislature and voters would be asked to approve another $1 toll hike to raise the $300 million in tunnel money is a bit more elusive. Although acknowledging that toll money would be needed for a San Francisco tunnel, Rentschler says there are no plans on the boards to seek an increase.

Even if all the money does come through and the tunnel gets dug, High-Speed Rail Authority boss Dan Richard says, the bullet train won't arrive in San Francisco until 2028 or so. Until then, the tunnel would be used only by Caltrain.

$650 million for a pie-in-the-sky project that may or may not get there by 2028. That's just how we do things in California and, in particular, Ms. Pelosi's district.

This West Coast big dig has a ring of familiarity to it. We're pressed for time but we'll check the archives as we have a sneaking suspicion that this is not breaking news rather something folks have been aware of for quite some time. We'll get back to you, accordingly.