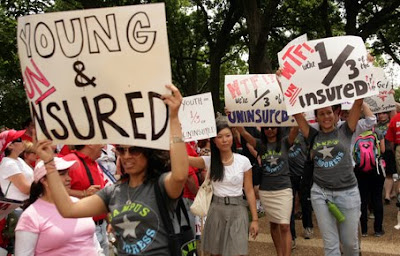 Harry Reid has apparently put together a compromise between 10 Democrat Senators (5 libs and 5 moderates) that will a) offer private insurance plans under the auspices of the federal employee health program and b) will enable middle-aged Americans to buy into Medicare. Of course, Harry isn’t letting on in any of the details… any of the details that will effect every man, woman and child’s healthcare. But never mind all that transparency, what of these compromises?

Ostensibly, this private insurance plan “option” is for those who are not currently covered for a variety of different reasons, the cost of health insurance being chief among them. But think about this for a moment: if the private insurance option is held to the same standards of coverage as the federal employee health program, how is that going to be affordable? On its surface, this private option solves nothing and in fact, makes it worse as it will, in most cases, be more expensive than most other coverage plans out there in the market.

The very people that are currently opting out of health insurance coverage will be forced to purchase something that is more expensive than their current options. Then what? Are you going to throw these people in jail because of the no-win situation created by the private option?

One would think liberals would be outraged by this plan to subject the un-insured to the evil and greedy health insurance companies and their costly plans.


And what of expanding coverage for Medicare? Wasn’t Obamacare going to pay for itself, in part, by making upwards of $500 billion in cuts to Medicare? How is that going to work? How in the hell do you expand coverage while simultaneously cutting funding? Well, it works if services and treatments are rationed but we’ve all been assured that won’t happen.


Again, we go back to the basics when arguing with Obamacare proponents on the merits of Obamacare. Precisely, what are its merits? What is in this damn bill that should get anyone to support it? The “merits” of this bill appear, disappear and then re-appear on a weekly, even daily basis. Outside of a blind acceptance of the benevolence of our elected leaders which is tantamount to being teabagged by Obamacare, there is no logical reason to support this bill.

Well, the theory behind health insurance costing less per capita is that you force everyone into it, including the healthy young folks that usually eschew it. The reality is hospitals have to treat all emergencies, so healthy people can be without and still get emergency medical care; which hospitals make up on the insured. By removing that burden and forcing everyone in; the average price will go down and the system gets rid of the free riders.

As for Medicare, this is the camel's nose under the tent; if that works it will get expanded down. But keep in mind it isn't going to be free, people would have to buy in and to the degree it limits services folks will not buy in. It will be interesting to see if they lose the AMA on that since Medicare negotiates down on the price and more of their customers will have to be serviced for less.