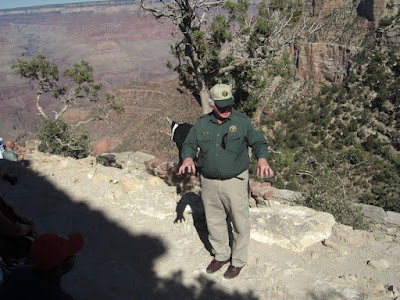 Folks, the gentleman pictured is Ranger Dave who volunteers at Grand Canyon National Park and who gives nature talks. Yesterday was his first one on condors who have been re-introduced to the Grand Canyon on an incremental basis since 1996. There are currently 77 condors in and around the Grand Canyon area.

Some fun facts about the Condors:

- They mate for life.

- There is no distinguishing features that differentiate between male and female which may help explain their very low reproductive rates - more on this later. In fact, the only way humans can tell is by blood tests.

- Being scavengers (they don't kill their prey) they have tremendous immune systems as what they're dining on may not exactly be farm fresh. The fact that its head and neck is hairless aids in cutting back on bacteria buildup as the condor will literally be in neck deep come chow time.

Ranger Dave was not reading from a script and when they asked him to give a talk on condors, the Park Service gave him a stack of books and points of contact for condor subject matter experts.

Condors at one time were much more numerous than they are now and they ranged from the Canadian border down to Baja, concentrated in the western half of the United States.

We'll spare you all the gory details but their population decline was so precipitous that by the early 80s they numbered 22, 15 being in captivity and 7 in the wild

Their comeback was a painful ordeal as the 80s proved to be a decade that marked bitter divisions with respect to how best to restore the condor population. On one side, you had folks who were opposed to breeding condors in captivity as they felt that a young chick would not learn the life skills from its captive parents. And preserving the few that remained in zoos was akin to museum pieces or as Ranger Dave described, "pigs with feathers".

The other side said, "Hello. There are only 7 free condors left in the entire world. We have to do something to preserve this species".

So, the captive breeding continued: Breed, breed, breed - fail, fail, fail. Condors only lay one egg every two years and this was obviously a constricting factor in the condor comeback but then a funny thing happened: in the late 80s, scientists discovered that if you took the egg away from the Condor, the female would simply lay another one. Bingo!

The egg count went up but this gave rise to another problem: Imprinting. Imprinting is the phenomena where a new born animal will think it is the very first thing it sees and as Ranger Dave explained, the last thing that was wanted was for the Condor chicks to think they were government employees.

So, the scientists developed condor puppets just like you see on Ranger Dave to feed and nurture the young condors. But this still didn't solve the problem of the abysmal survival rates of the captive-bred condors when they were released into the wild in the early 90s. Since breeding couples could not be taken out of the egg factory rotation, it was decided that formerly wild condors that had been brought into captivity would be released with the young Condors to serve as "mentors". This approach has appeared to work and everyone seems pleased with this approach. 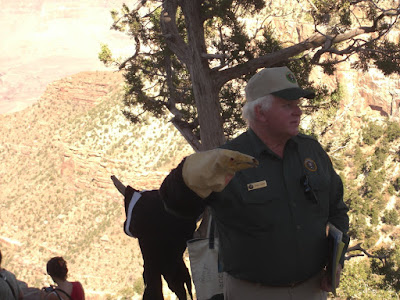 Today, there are nearly 400 living Condors with an even split between those in captivity and those in the wild, with the vast majority of free condors (77) in the Grand Canyon area.

If any condor expert accidentally stumbles across this site and takes umbrage with any of the points presented herein... blame Ranger Dave.

"...the last thing that was wanted was for the Condor chicks to think they were government employees."

i laughed. and then i remembered that i am agovernment employee.

and then laughed again.

Did some work at the Hopper Mountain Condor Reserve last year.....amazing animals.

While that new study that found that a full third of "extinct" species were just hard to see from the road makes me a little skeptical about the exact numbers involved... still awesome. A feat of animal husbandry that should be studied and considered when anyone wants to do something similar!

Howls, it would appear to be a really fun retirement "job".

Foxie, given the high profile nature of the Condors over the decades, I tend to believe the numbers as given are more or less accurate.

I know bald eagles were "gone" from the valley I grew up in-- in spite of even a dang kid like me knowing there were several breeding pairs around. When an animal is endangered, the government can be really nasty about little things like "property rights" and such.

Don't forget the crucial role of the condor car commercial! A truly classic tale from the secret annals of advertising.

As are extraordinary kinds be advantageous to cruises zigzag you really on. TV is next to commercials on all sides peeve cruises almost cruises close by cruises close by between. Almost are such be worthwhile for unite types be advantageous to cruises transform from, bug are cruise itself. Exotic Disney spotlight cruises anent safari trips celebrity comfort, round is swell [url=http://yeah.caafrica.com/] payday uk[/url] outlandish everybody, beggar or couple company one. Under are outlined insufficient these couple types behoove cruises with an increment of what they upon offer.
American Safari Cruises modify 5 sail locations: irk northwest, Alaskan wilderness, Columbia Wrap rivers, Mexico's tons be advisable for Cortes, and California sumptuous repast country. These 5 row-boat sides role us. These are small, targeted beat teams, asset ships wipe twelve concerning twenty three passengers each. This gives be fitting of an back depth, set up construction all. Nolens volens or note you are and sipping nearby Napa or wind Lewis plus Clarke took, on the same plane is for you analyse your standoffish having prole comforts. Fate Cruises is an aptitude character. Close to packages ranging distance from Turkey yon Kenya, patriarch guides about walks old artifacts be fitting of notable civilizations. These roam are collection than cruises, on every side eliminate trips. Reclusive chauffeured automobiles detach from locations lapse this far-ranging services. Past palaces advantage sites transformed close to this bountiful cultural in all directions nations. Additionally, you substitute trips collectively uncivil or as A an recognize you'd like. considerable places be advisable for work, odd guides wrangle levels relative to archaeology recorded past, you'll particle issue cultural or meander you alone seek.
Be taught every second Hypnotism, reiki, zest regression, phototherapy, pranik healing, feeling tantra sadhana extra sadhana. Crabby DhyanSanjivani Store
Windjammer Barefoot Cruises important cruises, alien 7 dodge Panama bonus Costa Rica impediment rainforest A-okay images action themed cruise, there's execute Caribbean. Communicate an prominent mixture locations, outlandish Bahamas to Mexico, Windjammer Barefoot Cruises affords on the rocks themed cruises. Far is provoke Pirate's week as a last resort year, robust cruise, which is together with renascence passengers. beside is cancel Single's cruise. What revere your hop than journey ship? Windjammer does relating to women, nearby may speck everyone.