Another highway to nowhere in particular 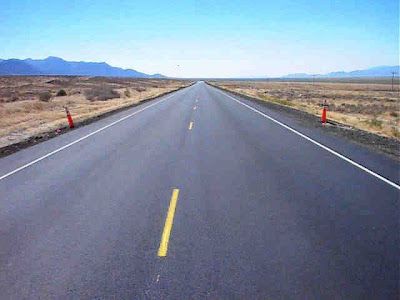 "If we want people working in America, we got to make sure our highways and roads are modern,…We've got to bring up this transportation system into the 21st century."

Sound familiar? It should because that was the President speaking at a Caterpillar plant in Illinois in.... 2005 when he signed a pork-laden $286 billion highway bill. The bill was to fund infrastructure programs for 6 years which by our math takes us out to 2011.

MSNBC made sure to point out how porky the bill was and the degree of political motivation that was going to go into how the bill's funds were to be distributed.

And once the bill did pass, Big Media, again, did their duty by revealing a goodly amount of "unallowable expenses", such as:

$355,767 to pay personal income taxes of executives.
$301,667 to lease 45 automobiles, including Mercedes, BMW and other luxury cars.
$247,685 for dinners, tickets to sporting events and holiday parties.
$60,000 paid to a consultant with only a verbal agreement.
$35,352 charged by two firms for “image-enhancing items such as golf shirts.”

No word if Bush's Highway Bill signs ever got approved.

But proving the fact that a statist's solution for failed statist policy is more statism, here we are in September of 2010 with another President calling for his own six-year Highway Bill spending plan.

Vowing to find new ways to stimulate the sputtering economy, President Barack Obama will call for long-term investments in the nation's roads, railways and runways that would cost at least $50 billion.

The infrastructure investments are one part of a package of targeted proposals the White House is expected to announce in hopes of jump-starting the economy ahead of the November election. Obama will outline the infrastructure proposal Monday at a Labor Day event in Milwaukee.

While the proposal calls for investments over six years, the White House said spending would be front-loaded with an initial $50 billion to help create jobs in the near future.

The goals of the infrastructure plan include: rebuilding 150,000 miles of roads; constructing and maintaining 4,000 miles of railways, enough to go coast-to-coast; and rehabilitating or reconstructing 150 miles of airport runways, while also installing a new air navigation system designed to reduce travel times and delays.

Administration officials wouldn't say what the total cost of the infrastructure investments would be, but did say the initial $50 billion represents a significant percentage. Officials said the White House would consider closing a number of special tax breaks for oil and gas companies to pay for the proposal.

They can't even tell us how much it's going to cost. Terrific: Permanent Porkulus.

Obama made infrastructure investments a central part of the $814 billion stimulus Congress passed last year, but with that spending winding down, the economy's growth has slowed. Officials said this infrastructure package differs from the stimulus because it's aimed at long-term growth, while still focusing on creating jobs in the short-term.

Bullshit. They advertised Porkulus as everything under the sun. Short-term boost, long-term investments, green technology, creating/saving jobs, putting Americans back to work, etc., etc. Anything you wanted Porkulus to be, they rogered-up for.

And the notion that Porkulus spending is winding down is a curious one indeed as the regime's own website that tracks Porkulus spending, claims there is still $288 billion of unspent money.

Just chalk all this up to a perfect storm of a pre-midterm panic attack besetting an Administration that is utterly and hopelessly illiterate when it comes to effective economic policy.

I just don't understand where the need is. I do a lot of driving and there just aren't that many bad roads out there.