What Would Bush Do? Not this. 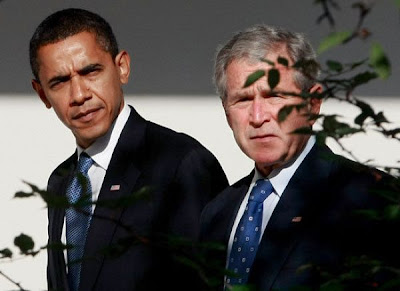 B-Daddy here. Dean has a series of posts on the theme of this administration's continuity with the policies of George W. Bush, most of them not to his liking, titled WW()D? He also notes Obama's proposed expansion of wire tap, going farther than Bush ever did. However, Obama lacks one thing that Bush had, restraint and class, when it came to dealing with his opponents in the press. Did you ever see Bush attack MSNBC, despite their relentless attacks on him? But here is Obama in Rolling Stone, after being asked if he thinks Fox News is "is a good institution for America and for democracy?":

Obama: “[Laughs] Look, as president, I swore to uphold the Constitution, and part of that Constitution is a free press. We’ve got a tradition in this country of a press that oftentimes is opinionated. The golden age of an objective press was a pretty narrow span of time in our history. Before that, you had folks like Hearst who used their newspapers very intentionally to promote their viewpoints. I think Fox is part of that tradition – it is part of the tradition that has a very clear, undeniable point of view. It’s a point of view that I disagree with. It’s a point of view that I think is ultimately destructive for the long-term growth of a country that has a vibrant middle class and is competitive in the world. But as an economic enterprise, it’s been wildly successful. And I suspect that if you ask Mr. Murdoch what his number-one concern is, it’s that Fox is very successful.”

Give me a break. Fox disagrees, so the President labels them "ultimately destructive?" Why can't he show some class. He loves to play the bully, with Massachusetts police officers, health insurers, and anyone who disagrees with him in general. His air of moral superiority offends, note his disdain for the fact that Fox is a successful economic enterprise. What enterprise has the President ever successfully run in his life?

B-Daddy, thanks for covering. Great points. This administration suffers from what I've termed a "grace deficit".

And to a larger point, perhaps, by what outlet would Bush be served up these softballs in which to slam anybody? Certainly not from that hippie fossil, Wenner.