Not all reporters created the same

The New York Jets find themselves in a little bit of trouble as this past Saturday, TV Azteca reporter, Ines Sainz claimed she was harassed by the Jets players in their locker room while she was trying to get an interview with the Jets' QB Mark Sanchez.

The National Football League is investigating claims that Sainz was sexually harassed with catcalls and whistles over the weekend while conducting an interview in the New York Jets' locker room. The allegations have unleashed a media maelstrom over what constitutes sexual harassment and what role -- if any -- a woman's attire plays in it.

Here's Sainz as she was attired at the Jets practice on Saturday. 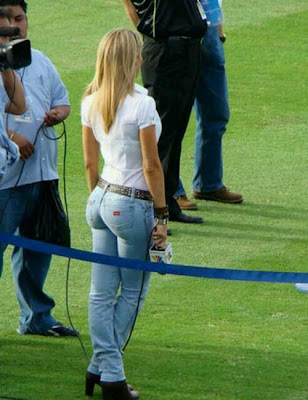 "It's my style," the 32-year-old television journalist told George Stephanopoulos on ABC's "Good Morning America." She's not trying to elicit leers, she said. "It is my style for all my life."

And she has no plans to change.

"I'm not trying to provoke anything," she told Meredith Vieira on NBC's "Today" show this morning. "I don't think I need to change. They are going to change."

That's a patently ridiculous thing for Sainz to say. Fact: a large part of her notoriety absolutely depends on men being who they are and not changing. Fact: If they do change, Sainz is out on the streets looking for work.

Ms. Sainz has apparently forgotten she's in America where we have crafted ourselves a delicate double-standard where we stick attractive yet tastefully-dressed women on the sidelines to perform inane on-the-field interviews with coaches as they're running off the field at half-time and where highly unattractive, slovenly-attired male reporters are not let anywhere near the locker rooms of womens' sports. We all get it. We all live by these rules. For better or worse, this is how things work in America, circa 2010.

And that's not to excuse the behavior of the Jets... oh, screw it... Yes. Yes, we will excuse the behavior of the Jets players in that locker room with a caveat that crude and/or explicit language was refrained from and the "harassment" was confined to whistles, hoots and general garden-variety ogling. Having been witness to the piece by piece emasculation of the American male over the years, what would be a more depressing development: Men acting like boys in the presence of this "reporter" or the Jets not reacting at all to this provocation to the male libido?

Either Sainz is as clueless as they come or this was a publicity stunt of the highest order.


And this is the beauty of having a blog as the above would most likely result in being suspended and/or fined or fired were this a paying gig.


P.S. If anything is to be taken from the Jets' performance on Monday night then all those pass routes they were executing in practice on Saturday and which were all purposely ran in the close proximity of Sainz, then it's clear they were all short dump-off patterns.

She'll probably take a deal to do Playboy and STILL act like a victim. If a girl wants to be hot, fine...own it, enjoy it while your bod CAN look like that, and don't be a bitch. It's a blessing to live in a nation where one can look and dress like that and know the ONLY thing that might happen are a few whistles. Because I'm quite sure the men in her native country would be far, far less behaved under the circumstances.