Warning: This is what happens when you get S.L.O.B.s together

We want to say a few more words about the SLOB (San Diego Local Order of Bloggers) quarterly Beer Summit/Confab that we did not get around to in the previous post but first and in a totally related subject...

... we were driving home from work last week and listening to the radio when we heard that House minority leader, John Boehner was taking some grief from Bob Schieffer for Boehner's smoking habit during his appearance on Face the Nation. And it was just a week or two before where we heard some fellow Republican refer to Boehner as "a lazy barhopper". Sheesh. Unfortunately, the context did not allow for whether or not this person thought that Boehner was not applying himself in an sufficient manner while making his appointed rounds. Would've been good to know.

But all this got our mental wheels grinding away and when we got back to BwD headquarters we fired off an email to our friend, Leslie of Temple of Mut. Knowing what a big fan of Mad Men Leslie is, we explained what was rattling around in our head and requested her photoshopping skills in melding the image of John Boehner onto that of the hard-living but brilliant Don Draper. Leslie replied, "Great minds think alike - already working on it." The group-think that exists amongst the SLOBs is truly breath-taking.

Ladies and Gentlemen, I am pleased to present the new face of the Republican Party for this election cycle: 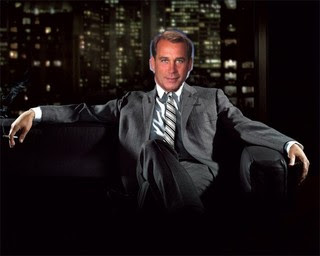 
At the Beer Summit, Leslie hinted that the grand unveiling was nigh and we must say we are blown away by the results.

One other order of business that was accomplished was the development of the Mad Men passion index for rating our election picks. Temple of Mut has all the details, here, because if we're going to allegedly rip the G.O.P. assunder let's do it with a Camel in one hand and a Scotch in the other. Seriously, check it out - we think you will enjoy.

But before we go, we must recognize! Tim of Left Coast Rebel and fellow SLOB, in addition to being picked up by The Daily Caller from time to time, now has a regular paying gig at Pajama's Media. We're damn proud of Tim as he is one of our own and we wish him great success in his burgeoning career as a citizen-activist-journalist. Congratulations, Tim!

This whole thing cracks me up because on a California Tea Party Patriots weekly coordinator call about three weeks ago, we were joking that Boehner should have been part of the Rat Pack. Love the new Mad Men Passion Index...but I do want to know where a Martini fits into the rating scale.