We were not aware of any conditional language or cooling off periods that were built into the original contract but apparently some people have other ideas.

The signs were posted by the Bureau of Land Management (BLM) along a 60-mile stretch of Interstate 8 between Casa Grande and Gila Bend, a major east-west corridor linking Tucson and Phoenix with San Diego.

They warn travelers that they are entering an "active drug and human smuggling area" and they may encounter "armed criminals and smuggling vehicles traveling at high rates of speed." Beginning less than 50 miles south of Phoenix, the signs encourage travelers to "use public lands north of Interstate 8" and to call 911 if they "see suspicious activity."

Pinal County Sheriff Paul Babeu, whose county lies at the center of major drug and alien smuggling routes to Phoenix and cities east and west, attests to the violence. He said his deputies are outmanned and outgunned by drug traffickers in the rough-hewn desert stretches of his own county.

"Mexican drug cartels literally do control parts of Arizona," he said. "They literally have scouts on the high points in the mountains and in the hills and they literally control movement. They have radios, they have optics, they have night-vision goggles as good as anything law enforcement has.

Let's let one of the Chip Dillers of the bureaucratic ruling class explain this to all you simpletons. 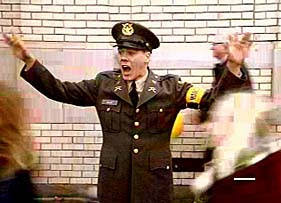 BLM spokesman Dennis Godfrey in Arizona said agency officials were surprised by the reaction the signs generated when they were put up this summer.

"We were perhaps naive in setting the signs up," he said. "The intention of the signs was to make the public aware that there is potential illegal activity here. But it was interpreted in a different light, and that was not the intent at all."

He said there should be "no sense that we have ceded the land," adding that no BLM lands in Arizona are closed to the public.

"I kind of liken it to if I were visiting a city I were not familiar with and asked a policeman if it were safe to go in a particular area," Mr. Godfrey said.

Translation: "Crap... they figured it out. They've interpreted those signs precisely as they were intended"

So, just consider southern Arizona as that part of the city you wouldn't want to venture into were you visiting from out of town. It's not "ceded" per se, rather a portion of our country where you run the risk of getting shot up by Mexican drug cartels. Big difference.

Or perhaps do consider this a Robert Rodriguez-style slo-motion ceding of a portion of our Union.

As the curator of those signs suggest: It's all a matter of interpretation, so take your pick.

I'm even surprised at how stupid they think we are sometimes.

C'mon Sarah,
Stupid or don't care, it's pretty real. Our problem is there is no legit press. Until there is something to break the collusion with the press and the status quo, the American people will not wake up. The bloggers are doing what they can, but most of America sits and watches the boob-tube with a little drool. I have made some personal changes, (kids, the ABoV..Dean knows) but something has to be done to change the MSM. Their death is coming way too slowly.

Am I just fool enough to believe that if crime gets too big for local and county law enforcement that the State Guard gets in there as well as some Federal support as well? These Drug F--ks ARE a pronounce threat to our citizens so what's next?

So which part of "We the People of the United States, in Order to form a more perfect Union, establish Justice, insure domestic Tranquility, provide for the common defence,[1] promote the general Welfare, and secure the Blessings of Liberty to ourselves and our Posterity, do ordain and establish this Constitution for the United States of America." do those signs represent?

Providing for the common defence? Defense of the drug lords perhaps, but us.

Securing the Blessings of Liberty? Anything but.

No matter how you slice it those signs, placed by a representative of the Executive Branch of the federal government, show that our current President is not "to the best of my ability, preserve, protect and defend the Constitution of the United States."

Oh, no, Sarah, I was making fun of your astonishment, although I know it was hyberbolic.

I just know how hard the internet thought process via blogging is fighting for our cause. But your comment was, How stupid do they think we are" Hey, we are collectively stupid.

How can we continue to employ crooked people to represent us?

How can we build the Empire State Building in the middle of the Depression, but we still have a ten year hole in the ground where Muslims can seem to put up a mosque.

Those two towers should have been rebuilt by this time and the only problem having a mosque near there should be how to find it with a pair of binoculars from the top of the new Twin Towers. As long as our beauracracey stands in the way of our Spirit, bin-ladin is slowly winning a battle. (caps intent)

I beleive this is possible because we have bred a media and culture that are in conformity with one another.

Let's keep up the fight!

Thanks to all you guys for the good reading!

Well, thank god they put those signs up, because those smugglers will kill anybody who 'sees' them doing their illegal activities.

It is a CRYING shame, that American public land is so infested with criminal illegal aliens, that going to a national park is just as dangerous as walking the streets of some ghetto in Los Angeles.