Fear not: Gen X is on its way! 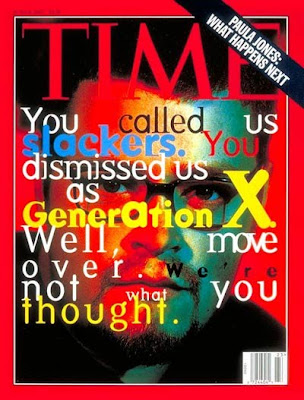 Earlier, this spring in conjunction with some commentary about Paul Ryan's budget proposal we spoke of a book Generations we read some twenty years ago. The book framed the history of the country in terms of 4 consecutive and recurrng generational co-horts. Of course, we were most interested in our generation, the Gen Xers and our Reactive generational cohorts that preceded us. The narrative arc that was common to our cohort generations was that though they were dismissed as shiftless screw-ups earlier in life (F. Scott Fitzgerald of the Lost Generation of the roaring 20s was the poster boy for Gen X's slackers of the 90s), they were called upon to make the tough calls and sacrifices in adulthood (think FDR, Dwight Eisenhower, George Patton and Harry Truman guiding the nation during the Great Depression and WWII).

With entitlement reform finally getting off top-dead-center at the state level, it's becoming increasing clear the 800 lb. gorilla sitting in the room at the federal level is the scrap that Generation X is going to be asked to take on.

And it's also becoming increasingly clear that we are not alone in that thought. Dig this from Reed Galen:

I believe we as a country, and more specifically those of us in the Gen X cohort, are looking in the mirror today. The question facing us is essentially the same: do we have what it takes?

Folks should be forgiven for asking, “For God’s sake, what’s next?” For any number of reasons we can’t seem to buy a break. And for entirely too many of us, we’re looking for someone to come help us fix our problems, either those we share as a people, those thrust upon us, or those of our own making. To return to my semi-Texas roots, it’s bootstrap time. To the extent each of us have the ability to solve our problems, now is the time to get after it. One thing is clear: the cavalry isn’t coming; they sold the horses and sent the rifles to Mexico.


(ed. note: we have no idea whether or not Galen was speaking tongue-in-cheek with respect to that last statement because he speaketh the literal truth.)

More than a small amount of time is spent blaming ”the system.” It’s the system’s fault Washington can’t get its act together. It’s the system’s fault bankers make too much money. It’s the system’s fault the sun rises in the east and sets in the west. What the system has created the most of though, is apathy. Worse than apathy is antipathy. We are a hair’s breadth away from "the system" being seen as not just unfair but illegitimate. When 17% of voters claim in a recent survey that the Federal government is no longer qualified to tell them what to do, antipathy is taking hold of the populace generally and the electorate specifically.

(ed. note: can we be forgiven for thinking 17% is disappointingly small?)

As my generation is actuarially responsible for the safety nets of our elders, we should double-down on the assumption that we’re on our own. Not much more complaining needed on that front: We made a promise to look after them the day we joined the workforce; maybe even the day we first showed up in our parents’ arms.

I hope, like me, most of my generation doesn’t plan to sit around and worry about what "the system" has done, or might do to them. The days of thinking about how things were, or how things should be are gone. Everyday we go out and try to make the best life we can for ourselves and our families, and ask "the system" to just leave us alone. If the Beltway politicians want to screw around with debt ceilings and Super Committees that will do little other than raise our cost of living, have at it. But there are a lot more out here like us than they think - and they ignore us at their peril

Folks, the tea party is Generation X. Mocked, reviled and scorned but guess what? We figured it out. For all our human flaws and frailties and for all our missteps, real and perceived, we know what needs to be done. While the rest of the world is content to whistle past the graveyard, we are fully cognizant and prepared to make those sacrifices that must be made if we desire to see this country retain its greatness and not descend into a state of a banana republic, a destination at which we most certainly will arrive unless very specific and rapid course corrections are made.

To quote Secular Apostate: "If anybody was going to take up the slack for you, they would have arrived already."


Have a great rest of your Sunday. We'll see everybody bright and early on Monday.