Some more thoughts on the British riots

We have been viewing the response to and the causes of the riots over in England through the narrow prism of an unwillingness to defend one's own property but our favorite moral scold, KT, has a somewhat different perspective on it. First, check out this video:

The looters are all offense and the police are all defense. Because the police have no missile weapons and are too weighed down with armor to pursue their enemy, the looters can engage and disengage at will with absolutely no risk to themselves. The psychology of the mob changes the instant they realize this - at about 0:30. The problem isn't that one mob figured this out, it's that they all did or all will in the very near future.

This is what happens when you won't aggressively defend your culture.

And to those who would say the citizens and shop-owners don't have the means in which to defend themselves, that too is merely symptomatic of an unwillingness to defend one's culture.

Frank Miniter explains it wasn't always this way over in England:

For context, consider the “Tottenham Outrage” of 1909. Two men in Tottenham, armed with semi-automatic handguns, attempted to rob a payroll truck, but the guards resisted. After one robber fired his gun, police came running. The robbers fled on foot. The chase lasted two hours and covered about six miles as other officers and armed civilians pursued and engaged the robbers. One of the thieves committed suicide and the other later died in surgery. One officer and one civilian also were killed. The bravery of the officers and civilians prompted the creation of the Kings Police Medal and the funeral processions for the slain officer the civilian passed through streets lined with mournful Londoners. Those weren’t the kind of people who demonize police officers or take off their pants for thieves.

Contrast that with this, a young man in humiliation forced to strip down to his skivvies in order to give up his clothes to his tormentor. 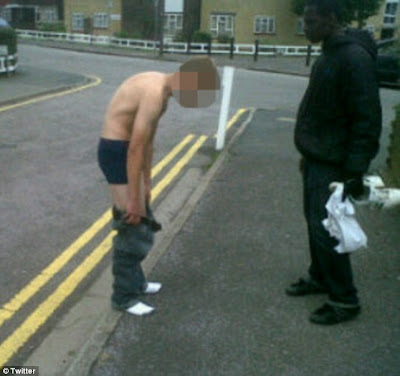 Entitlement cultures and 2nd amendment rights are two concepts that seem to butt-up against one another, doesn't it seem?

We're out of time but in keeping with that theme, the best line we've heard thus far with respect to the riots comes from Say Uncle:

What’s the cause of the riot? I’m guessing lack of incoming fire.

The culture of dependence is something they DO seem ready to defend.

Shopkeepers with firearms might have changed the equation. They would have the ultimate "skin in the game," in terms of privatizing defense of property.

Thanks for the link.

I want police that, when they see your shop is being looted, become the aggressors.

Peace through superior firepower. I am hoping to put up a piece on how I am going to pepper spray and archery lessons, so at least I have some means of defending myself. I fear that we are seeing our future in these videos.