Getting ready for some football (UPDATED)

(scroll down for update)


It's become a cottage industry across the blogosphere to bang on ESPN for their pretentiousness and over-inflated sense of self-worth (and we are just as guilty as the next blog for doing so) but they wouldn't be where they are if they consistently made bad programming decisions.

Anyway, as if you needed any help, here is a hi-lite tape of Marshall Faulk while he was at San Diego St. which we stumbled across a week or so ago and we were waiting for a relevant opportunity to share it. Since it's too far past his Hall of Fame induction ceremony earlier this month, this would appear to be as good a time as any.

Faulk is probably our favorite back of all-time with LaDanian Tomlinson running a close second (yes, we were blessed to see both with our own eyes here is San Diego). And that's also the 1-2 combination of running backs we've seen that have maximized the full arsenal of their god-given running back abilities. Running, receiving and running after the catch, ball security and blocking... no one did it better than those two.


* We say this as medically diagnosed football addicts.

pretentiousness and over-inflated sense of self-worth...

Did we mention blatantly hypocritical?


So between ESPN Golf anaylyst Paul Azinger and ESPN's Kenny Mayne, who do you think got disciplined for the following tweets?: 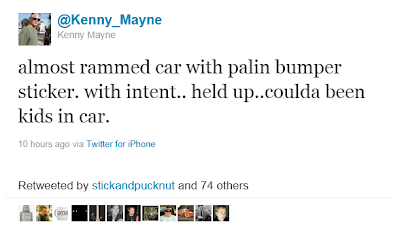 If you said Kenny Mayne, you live in some sort of fantasy world.


ESPN is coming down on Paul Azinger for mocking President Barack Obama on Twitter. The golf analyst tweeted Thursday the Commander-in-chief plays more golf than he does — and that Azinger has created more jobs this month than Obama has.

“Paul’s tweet was not consistent with our social media policy, and he has been reminded that political commentary is best left to those in that field,” spokesman Andy Hall told Game On! in a statement.

ESPN’s Hall would not comment on whether Azinger, who won the 1993 PGA Championship, will be fired, suspended or punished in some way. “We handle that internally,” he said.

Going public with a violent fantasy about another person is apparently A-OK with the world-wide leader, however.

they gotta ruin football too eh...enjoy !!!..pre game for the jets cancelled on account of Irene~!