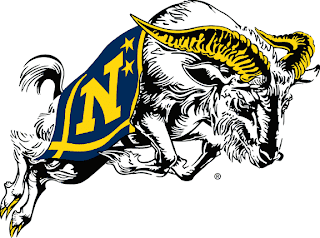 At the risk of never being allowed to blog in this space again, I bring your attention to a "not even once in a blue moon" set of circumstances. Yes, the vaunted midshipmen of Navy stand alone as the only undefeated team among Independents in the NCAA Football Bowl Subdivision (like the way that just rolls of your tongue, unlike "Division I" for instance). Granted, Navy opened against a Temple team most noted for its on the field futility over the last several seasons. Still the mids showed they are going to again have a potent running game under Coach Paul Johnson's triple option offense.

Meanwhile, the other independents all lost. Notre Dame opened at home and posted one of their worst home opening losses in program history. Gotta love them Yellowjackets. (Full disclosure, on any given Saturday one of my favorite teams is the Notre Dame opponent.)

Army lost to the Akron Zips. I first became aware of the Zips in their roll as fodder for the likes of Penn State, Purdue, Iowa and Nebraska so those big schools could pad their records for bowl consideration. New Army head coach Stan Brock looks to have his work cut out for him. Army has lost four straight to Navy, something taken very seriously by guys who show up to work at the Pentagon wearing stars on their collars. Given that coach Brock was a protege of Bobby Ross, the losing coach in three of those efforts, I make the following fearless prediction. If Navy beats Army this year, Coach Brock is gone before Christmas. It looks like Navy has the talent to beat Army again, but I am not making that prediction. In a storied rivalry over 100 years old such as Army-Navy, history is replete with upsets. (Certainly most readers of this column would agree that USC was more talented than UCLA last year, for instance.) I would say that Army's fours straight losses actually give them the edge this year.