Now, THIS is the type of 'Boycott' we can all get behind. 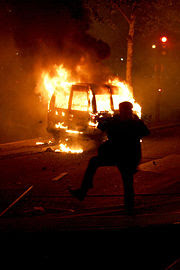 We’re not Catholic… but we’ve got many Catholic friends so it has caused us no small degree of shame and embarrassment over the behavior displayed in this row up in San Francisco right now.

There is a street fair in the City called the Folsom Steet Fair which is an unabashed leather/fetish happening and which is sponsored in part by Miller Brewing Co. What has a particular Catholic group upset is a poster for the event that depicts leather-clad males and females sitting around a table, Last Supper-style, with sex toys littered around the same table. And just to make sure the less-savory wings of the Catholic Church were properly offended… Jesus is black. (This follows a theme in many of the “alternative” Christ stories. The only one that beats black Jesus is Jesus having relations with Mary Magdalene. It seems every single one of them, from the Last Temptation of Christ to the DaVinci Code, can’t seem to drop their lurid fascination of Jesus having sex with a prostitute.)

This group, the Catholic League, is calling for Miller to pull their sponsorship of the event and short of that they are calling for a boycott of all Miller products. A boycott? Ohhhh…. no .. anything but a boycott.

Are they serious? A boycott?. Honestly, what a bunch of wusses. Message to the Catholic League: If you want some reaction… if you want some justice… if you want to be taken seriously as a player and have newspaper editorial staffs and legislative bodies the world over roll over to your demands and the President of the world’s most powerful nation fall all over himself extolling the virtues of your religion then get serious!

Torch some cars… throw rocks through storefront windows…. declare some fatwas....be-head some infidels….! Show that you are a true believer! Demonstrate to the planet that your religion is not to be trifled with and that your religion really is a tolerant and peaceful one… until someone says it isn’t. Make me BELIEVE!

Short of all that, don’t waste our time… we don’t drink any of Miller’s swill anyway.

I better put this out before I comment on the blog, lest I be accused of "not getting it"

Boycott and hoopla are just what these miscreants are looking for. I don't think they could stand it if we just looked away and let them play the fool.

What a bomb of a movie was the Last Temptation of Christ! But I remember the box office ratings brought out by outragious indignation and protest to see this train wreck of a movie.

Road dawg, Point taken. I would've never even have heard of this Folsom Street Fair were it not for the call for a boycott. Hey, would Michael Moore go away (or just lose some weight) if we just ignored him?