Move On (Not that MoveOn) 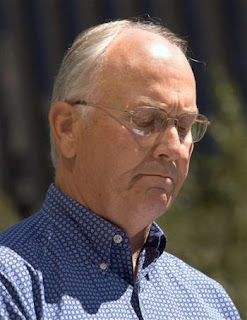 There is an old saw, attributed to Will Rogers, "Idon't belong to any organized party. I'm a Democrat," Apparently, the Republicans' continued drift to the left includes the same lack of organization. Larry Craig announced yesterday that he was reconsidering his resignation if he could beat the rap (after a guilty plea mind you) for disorderly conduct in the Minneapolis airport men's room. As previously discussed by your able host, his conduct, lewd or not, deserves jail time just for his violations of "Man Law".

Meanwhile, he will drag his family through more humiliation because he wants to remain a senator. I think this kind of behavior is why average Americans don't trust politicians. Not the conduct in the men's room, but the insatiable lust for the spotlight, power and privilege that accrues to our elected elite. Most healthy Americans conclude that there is something a little off with those who have such cravings at the expense of their families and their own dignity.

The cynic in me is waiting for an announcement like: "My drinking caused me to engage in risky behavior. Through this experience I found Jesus, who told me to check in to Betty Ford."
The announcement I'd like to see: "I am resigning from the U.S. Senate, effective immediately. I am sorry for my conduct, it did not meet the standards of my office. I am sorry I have hurt my family and let down the people of Idaho. Please forgive me."
In a better world, Larry would already be joining his family at Coeur d'Alene.