Honey, My pay got docked a half a mil 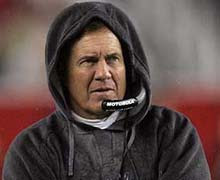 When I first read the rumor that the Patriots had used a video camera to steal defensive signals from the Jets, I thought, what's the big deal? Isn't that routinely done in baseball? I didn't know there were specific rules for this activity; so I say good for the NFL commissioner, Roger Goodell. As previously posted in this column, the integrity of the sport is key to maintaining the fan base.

Relatedly, that much needed wardrobe upgrade Bill Belichik had been planning is probably on hold. By the way, I saw 49er coach Mike Nolan in suit and tie on the sidelines in their victory over the Cardinals. I know that the classic coaches like Halas and Lombardi did that; but it looked a little off to me. Further research answered the mystery; the suit was designed by Reebock, not Armani or some other Italian. But I have digressed into a "Queer Eye" moment.

Back to the issue of the fine, imagine having to explain to the Mrs. that your pay got docked by half a million for cheating. The coach's exact pay is not known, so hard to say how much this hurts. But I just can't imagine him having that kind of cash sitting in the freezer; even Congressman only have 90 large on hand or so.

Anyway, go Chargers, maybe all this distraction works to there advantage as they visit the Pats this weekend.

B-Daddy, I've only been able to follow this from the periphery but the Patriots official statement claimed that they gained no competitive advantage from the video-taping. Huh? If they didn't then why were they videoing in the first place? I gotta believe their intent, at least, was certainly to gain a competitive advantage. Weird.