Kill 'em all 'cause Holder can't sort 'em out. 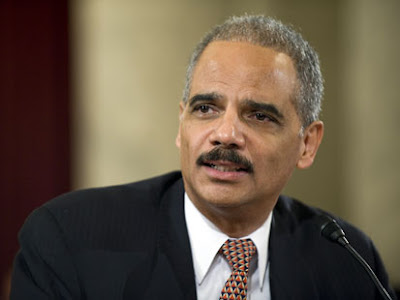 When a window of opportunity opened to strike the leader of al-Qaeda in East Africa last September, U.S. Special Operations forces prepared several options. They could obliterate his vehicle with an airstrike as he drove through southern Somalia. Or they could fire from helicopters that could land at the scene to confirm the kill. Or they could try to take him alive.

The White House authorized the second option. On the morning of Sept. 14, helicopters flying from a U.S. ship off the Somali coast blew up a car carrying Saleh Ali Nabhan. While several hovered overhead, one set down long enough for troops to scoop up enough of the remains for DNA verification. Moments later, the helicopters were headed back to the ship.

The strike was considered a major success, according to senior administration and military officials who spoke on the condition of anonymity to discuss the classified operation and other sensitive matters. But the opportunity to interrogate one of the most wanted U.S. terrorism targets was gone forever.

Well, we suppose that takes care of that thorny issue of whether or not we will mirandize unlawful combatants and terror suspects out in the field.

In fact, the Post story reports that this unofficial shift in strategy from capture to kill has resulted directly from the Obama administration's and by extension, that miserable hack’s Justice Department’s lack of a coherent policy for detaining prisoners.

After all, when you promise to close Gitmo, are in process of trying one of the highest profile terror leaders in civilian court and offer inconsistent guidance to the boots on the ground with respect to Miranda policy, you’ve pretty much painted yourself into a corner where whacking these high-level operatives before valuable intel can be extracted remains your only tenable option.

Holder and Obama are wimps and are clueless on fighting terror. They care more about negotiating with terrorists than keeping Americans safe.

This makes no sense. If al-Qaeda was "a revolutionary movement" that controlled territory, or if they were just part of the Somalie Army, under the Geneva convention they would not be Mirandized, but treated as POWs and interrogated. By being "unlawful combatants" they somehow gain more privileges than combat soldiers? This makes no sense.