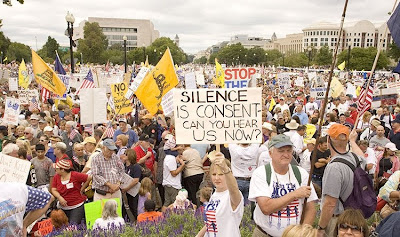 B-Daddy here. The Republican Party does not deserve the support of the Tea Party movement. One of the key goals of the movement is to get Congress to reduce spending and especially useless, wasteful spending. However, Republicans who have been publicly criticizing the stimulus bill have been at the trough, requesting funding for projects in their home states and districts, as documented in this WSJ article (H/T DailyKos) Here is a prime example:

Rep. Paul Ryan, a Wisconsin Republican who called the stimulus a "wasteful spending spree" that "misses the mark on all counts," wrote to Labor Secretary Hilda Solis in October in support of a grant application from a group in his district which, he said, "intends to place 1,000 workers in green jobs." A spokeswoman for Mr. Ryan said the congressman felt it was his job to provide "the basic constituent service of lending his assistance for federal grant requests."

Re-read that last sentence about "constituent service." I don't know about you, but it makes me cringe. This is why a Tea Party movement is needed in America. Such statements should eventually become shameful and embarrassing for any politician to admit to.

Ryan, who has put together a reasonable health care alternative, should have publicly trumpeted his refusal to perform "constituent service" in this case. It would have resonated with his district, I have no doubt.

I remember Bush imposing steel tariffs in 2002, for purely poltiical reasons during the Congressional election season. The damage to his credibility on free trade far outweighed the few votes he might have garnered. The Republicans went on a spending binge to buy votes as they forgot every principle that ever got them elected. Eventually, the Republicans actually polled ahead of Democrats as the "party of big government" and were subsequently trounced in the 2006 elections. I think the tea party movement proves that there are vast numbers of Americans who vote for principles, and can't be bought by being thrown the occasional pork bone.

Right now, the only thing saving the Republicans from permanent oblivion is that the Democrats are far worse when it comes to wasting the taxpayers' money. What a great campaign slogan "We Suck Less."

This is why federal pork needs to be eliminated entirely. As long as Congress is passing out hundreds of billions in pork, you'd be doing a disservice to your constituents not to grab a piece.

The whole system is corrupt and needs to be ripped out by the roots.

Right on B-Daddy! For about two weeks the GOP has ramped up its attempts to copt the tea party...and it isn't helping their image one bit. Leslie, one of our co-founders put this piece together for us on the on-going battle (and trust me...we've been dealing with their bs from day one):
http://templeofmut.wordpress.com/2010/02/17/a-leader-is-a-dealer-in-hope-therefore-there-is-no-tea-party-leader/

WC is correct. As long as there is slop at the trough, the swine will come to feed.

Thanks for the comments gang.