Premier Williams is oddly unapologetic about his efforts to stay alive 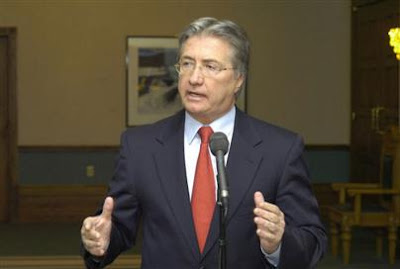 Recall the hoopla earlier this month when Newfoundland and Labrador Premier Danny Williams travelled to Miami to receive a sternotomy for his heart rather than wait in line in his home country. Williams speaks out on the manner:

An unapologetic Danny Williams says he was aware his trip to the United States for heart surgery earlier this month would spark outcry, but he concluded his personal health trumped any public fallout over the controversial decision.

In an interview with The Canadian Press, Williams said he went to Miami to have a "minimally invasive" surgery for an ailment first detected nearly a year ago, based on the advice of his doctors.

"This was my heart, my choice and my health," Williams said late Monday from his condominium in Sarasota, Fla.

"I did not sign away my right to get the best possible health care for myself when I entered politics."

It should be noted that the procedure performed by the American doctors on Williams did not require any bone breakage as the Canadian procedure would’ve entailed.

In a sane and rational world we would ask the question why acting in one’s best interest and best health would “spark outcry” and why anyone would think twice about being unapologetic about it.

Ah, but this is the bizarro world of socialized medicine where acting in one’s own best interest in order to get quality medical care in an expeditious manner is considered subversive and selfish behavior.

You do get the sense of descending into an Orwellian reality that settling for crappy health care becomes a societal badge of honor and indeed a source of patriotic pride.

"Debbie Hirst's breast cancer had metastasized, but the (British) NHS would not provide her with Avastin, a drug widely used in the U.S. to control such cancers. According to a report in the New York Times, Debbie opted to pay for the drug herself while getting the rest of her publicly funded treatment. NHS bureaucrats found out about Debbie's plan and informed her doctor that Debbie would have to accept the "free" care as is or, if she wanted the Avastin, she would have to pay for it and all the rest of her treatment too."

"NHS officials told the British press that to allow Debbie to pay for extra drugs to supplement government care would violate the philosophy of the NHS by giving richer patients an unfair advantage over poorer ones. British Health Secretary Alan Johnson told Parliament patients "cannot, in one episode of treatment, be treated on the NHS and then allowed, as part of the same episode and the same treatment, to pay money for more drugs. That way lies the end of the founding principles of the National Health Service."

The science is settled. Nationalized healthcare has nothing to do with improving your personal health but everything to do with preserving a philosophy that we all possess an inalienable right to the same crappy healthcare.

It's about equality, right?

If and when Obamacare does become a reality, we look forward to participating in a robust healthcare black market.

Great post Dean. This is all you need to know about single payer health care.

It's good, when you have socialized medicine, to have a back-up plan. Most people don't.