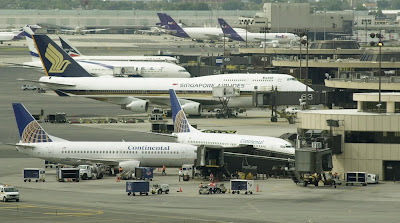 As ones you have just recently returned from a vacation that involved 4 separate flights we feel the pain of those who have been stuck on the tarmac for hours at a time because of flight delays.

And just as we can sympathize with those stuck in a crowded, stuffy cabin, we can also see how the inevitable government intervention into this inconvenience can and will actually make the problem worse.

The nation's recent onslaught of flight cancellations is a harbinger of what passengers can expect from airlines looking to avoid new multimillion-dollar fines for leaving people stranded on grounded planes in bad weather, according to federal data and aviation experts.

The government announced in December it would fine airlines $27,500 per passenger for long tarmac delays — or $2.75 million for a 100-passenger flight.

Cancellations cost far less than a huge fine, especially since seats are routinely prepaid and airlines save fuel cost.

These fines were a result of something called the Airline Passengers' Bill of Rights enacted by the FAA designed to protect passengers, however when one starts extending bills of rights beyond what is in the constitution, the law of unintended consequences kicks and and you have airlines cancelling flights and leaving passengers in the lurch which is cheaper than having passengers stranded on the tarmac for more than 3 hrs.

This rule does not go into effect until April 29th but airlines such as JetBlue have already begun cancelling flights just to get into the swing of things (those learning curves can be a real bitch, sometimes).

Have you weighed the cost of gas, wear & tear, vs. gas to airport, (to/from) wait time, baggage handling mishaps, possible or likely flight delays/ terminations and the car rental on the other side?

Of course the canceling of the "rolling of the cart" and the first class treatment of the airlines need to be weighed against the beauty of the great American road-trip, but perhaps you're burned out on all that.

In the meantime, we live vicariously through you and are so glad for your good time. Feel free to post more great photos!

Not sure where to post this but I wanted to ask if anyone has heard of National Clicks?

Can someone help me find it?

Overheard some co-workers talking about it all week but didn't have time to ask so I thought I would post it here to see if someone could help me out.

Seems to be getting alot of buzz right now.

Interesting article. My website user sends me this link.