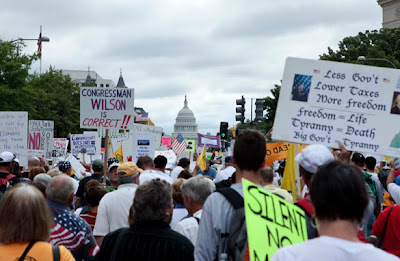 Figuratively of course.
B-Daddy here. Drudge is linking to an article that claims the Dems are preparing to "Rahm through" Obamacare through reconciliation, if they don't get their way with Republicans at the so-called health care summit.

BACK FROM THE DEAD: DEMS VOW TO RAHM-THROUGH HEALTHCARE

This makes a mockery of any pretense of bipartisanship on Obama's part, as if any more were needed.

Time to call and write your Congress critter, get to the next Tea Party rally, write letters to the editor, write on your blog, twitter or facebook. If the only accomplishment of the Tea Party movement is killing Obamacare, then it will have been worthwhile. We will accomplish much more, but this can be the signature victory that convinces Americans that ours is still a government of the people, by the people and for the people.

This monstrous assault on our liberties must be defeated, or our government will be set inexorably on a path of socialist expansion and ruin. I also urge the Republicans in Congress to earn our votes, by using every parliamentary method possible to defeat this bill. Walk out of the "summit" if necessary, embarrass this embarrassing President.

P.S. Please see my article about why the assumptions and premises of the debate are faulty. Until we attack the real issues, health care insurance cannot be reformed.