We spent the day up at the folks' place hanging out and having a great time catching up with brothers, sisters, nieces, in-laws, out-laws, nephews, nieces and close family friends alike.

Hot topic du jour: At what age can a man get away with crossing his legs, underside of knee on top of other knee, as opposed to the more masculine-looking cross legs, ankle/foot propped on knee of opposite leg? Over/Under: 40?

Anyway, with this in mind and taking in the strata of ages represented there at the ancestoral family compound it reminded us of blog piece we link to every summer as it is so spot on with respect to growing up as we and our older brothers did in the 60s and 70s and trying to unlock the mysteries of just what it meant to be an adult: The Patio Culture and the
Promise of Joining the Adults' Club:

The tables were topped with mosaic-sized tiles, and beers sat on wet coasters. Ashtrays were to be found in abundance, and were of the geometric, pastel-colored abstract type favored in the fifties. The adults were in shorts and short sleeved sport shirts, smoking, occasionally swearing in gruff voices and laughing at jokes I didn't understand. As often as not they were talking about their war days. Most interesting to me, there were a couple of beer signs used as decoration. The most memorable was the Miller High Life one with bouncing lights. (See links at the end of this article for an image.) There was also a Seagram's 7 display behind the bar that somebody must have intercepted on its way to a liquor store. The significance of the big seven wearing the crown mystified me (Why a seven? Is that how many drinks you have to have?), but I was properly awed by its symbolic power and assumed it was the symbol of an adult's club of some kind. 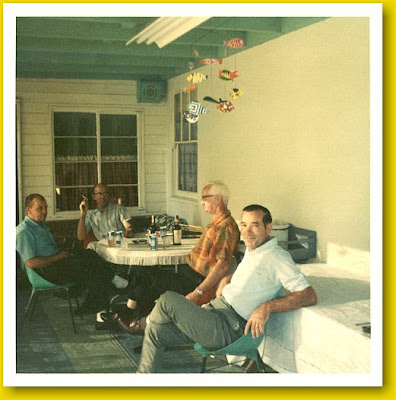 I was introduced by my parents, patronized by their friends, and offered a glass of Bubble-Up and a seat by the bouncing lights. By the time we left an hour or so later I knew I had been exposed to something wondrous. It was a glamorous, sophisticated, heady collection of sights, sounds and smells, and it caused me to wonder about the world of adults and made me look forward to becoming one myself. Being an only child, I had no fellow observer to help me draw conclusions, but this much I did realize: Becoming an adult and a full member of the patio leisure society was definitely something I wanted to do. What I couldn't have known was that by the time I came of age the rules would be changed, thanks to the Beatles, drugs, Viet Nam and the youth culture in general.

Please do read the whole piece at the link and see if you agree with the author's perspective.