A show of overcoats but not much else 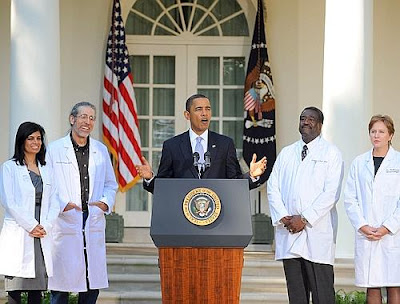 Recall the photo op of AMA doctors and President Obama at the White House during the big push to get ObamaCare passed and which was designed to show the solidarity of the nation's most recognizeable medical association backing the legislation. A survey conducted by physician recruitment firm Jackson and Coker had some interesting results regarding doctors' opinions of ObamaCare.

17 - The percentage of physician in the country that belong to the AMA.

13 - The percentage of physicians in the AMA that agree with its support of the law.

47 - The percentage of those who have left the AMA because of the AMA's continued backing of the law.


Because many of those who sign up for healthcare under the new law will wind up on the Medicare and Medicaid rolls, it does not improve the situation. Why? Because Medicare only reimburses at 81% of the rate that private insurers pay and Medicaid is even worse at a 56%.

These lower reimbursement rates force doctors to see more patients to make up the difference thus decreasing the amount of time the doctor can spend with individual patients. In fact, an increasing number of doctors are leaving the Medicaid program altogether.

As the number of doctors who will treat them dwindles, beneficiaries of public insurance often must resort to costly alternatives like emergency rooms (ER) — even if they only need routine care.

More than 30% of Medicaid enrollees visited an ER in 2007, compared to the less than 20% of Americans with private insurance.

These visits exert a huge burden on the U.S. health care system. A 2009 study in the Annals of Internal Medicine found that treatment for three common illnesses cost an average of $166 at a general practitioner’s office. The very same treatment could run upwards of $570 in an ER.

Up to 27% of visits to ERs across the country are for non-emergency medical treatment. These unnecessary visits end up costing the country approximately $4.4 billion each year.

ObamaCare will only make these matters worse. By 2019, Medicaid will cover at least an additional 18 million Americans. All these new beneficiaries may have nominal insurance coverage. But they’ll struggle to secure a doctor’s appointment and will thus turn to already over-worked ER staffs.


Those are some pretty stunning numbers and would appear to be a vote of no confidence from the very people who will be forced to comply with the law.

When did confidence in the law ever stop the Government from passing one?

Maybe they're wearing white coats because they've come to take him away!

If you recall, this was the event where the White House was scrambling at the last minute to hand out the over coats to the doctors that had attended so they could look more, you know, doctor-like.