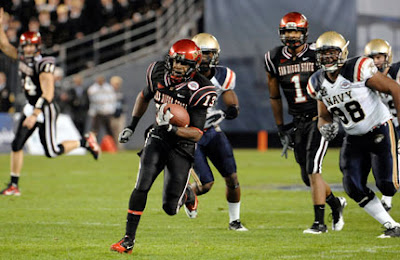 
Let's start off with an early game that has some local intrigue as the 3-0 San Diego St. Aztecs go to the Big House at Ann Arbor to take on the 3-0 and No. 22 Michigan Wolverines and the Aztecs, old head ball coach, Brady Hoke.

The Aztecs have gone to the Midwest on multiple occasions over the past several years and have come oh-so-tantalizingly close against the likes of Notre Dame, Michigan and Ohio State only to come up short. Two weeks ago, they found a way to beat Army in a game they would've found a way to lose in years previous and last week they were down 10 to Washington St. at half before ripping off 28 straight points to win going away, 42-24.

As 8 point dogs we're saying, screw it!, this is the year the Aztecs get it done. Mark down a close one for the Aztecs today.

If A&M follows through on its threat to bolt the Big 12 for the SEC, this will likely mean this will be the last time you will see this matchup. And if A&M does indeed leave, expect the dominos to start falling and the Big 12 to be no more.

Your ACC game of the week: No. 21 Clemson Tigers host the No. 11 Florida State Seminoles. Let's see how FSU responds after getting handled in their we're baaa-ack game against No. 1 Oklahoma last week.

Yes, we know what you're thinking: a primetime game involving LSU... playing away from Tiger Stadium

ESPN makes a PAC-12 night call to the desert southwest

No. 23 USC makes their first roadie at Arizon State on ESPN

P.S. The PAC-12 says they are staying put at 12 teams. Sure they are. If Texas A&M bolts for the SEC, expect the PAC-10 to immediately offer an invitation to Texas who will bring Texas Tech, Oklahoma and Oklahoma St. along with them for your first 16 team super conference. Mark it down.

* SDSU running back and second-leading rusher in the nation, Ronnie Hillman.