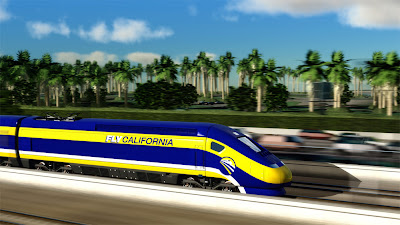 Bulk of high-speed rail costs could fall to state


As California prepares to commit tens of billions of dollars to an ambitious high-speed rail line from San Francisco to Southern California, Congress' political will to provide the bulk of the funding is disappearing, leaving the possibility that the state could end up stuck with a crushing financial burden.

State voters have agreed to issue more than $9 billion in bonds to build the system, but that's a fraction of the $43 billion projected tab for the initial phase. And those costs could swell to $65 billion or more, by some estimates.

Should federal funds dry up after the scheduled start of construction next year, the state could be left with no more than an unfulfilled dream and some tracks in the Central Valley.

"If the federal government and private investors are not going to provide funds, and California is broke, why would it take on an enormous new commitment?" asked Martin Wachs, a Rand Corp. transportation expert and former director of UC Berkeley's Institute of Transportation Studies.


Why, indeed because with its current make-up, fat chance of any federal tax dollars being squeezed out of Congress.

And doesn't the following prove that, for some people, it's not about dollars and sense but rather an ideological struggle.

Sen. Patty Murray (D-Wash.), chairwoman of the Senate panel that funds transportation, lashed out at cuts to high-speed rail proposed by House Republicans at a hearing earlier this year.

"We are at a pivotal moment in our national transportation policy," Murray said. "But the recent focus in Congress on budget cuts has created a race to the bottom that makes it difficult to continue those investments."


Pivotal moment? Missed that memo, Patty. To quote KT: "Are there any businesses that aren't expanding because they can't get their goods from point A to point B? Any? "

If CARB (California Air Resources Board) continues on its current jobs-killing trajectory, we may have to answer in the affirmative.


And the plan would require some ambitious engineering. Tunnels would stretch miles. Trains would soar over cities atop viaducts six stories tall. Three mountain ranges would be crossed. The zigzagging route would gobble up homes, businesses and farmland.

For a state that brings conventional construction projects to a grinding halt at the sight of an endangered African dung beetle, forgetting a moment about the cost, does this project have an ice cube's chance in hell of even being completed given the logistical challenges inherent to this project? And this doesn't even account for the bazillion eminent domain cases that will have to be worked out.


Proponents are arguing for the state to not worry about future funding and launch the rail program with $6.3 billion the authority can immediately use, $3.5 billion of it from prior federal grants and $2.8 billion from the state bonds approved in 2008. That's enough money to start construction next year on an initial 140-mile segment from south of Chowchilla to north of Bakersfield. California is required to spend the federal money by 2017, meaning construction would have to start in 2012.


If California governor, Jerry Brown forges ahead with this high speed choo-choo project look for that useless 140 mile stretch of track left to rust out in the middle of the Central Valley to acquire a new name: Brown's Folly.

While I often concur with you lines of reasoning, in this case I must throw down the gauntlet and diverge tracks on this train of thought!

It would be called Rail to Nowhere not Brown's Folly

I think it would be great to build a rail ferry that takes you can your car from Anaheim to Santa Barbara. No exits, no stops, just a bunch of flatbed cars that make the thing act like a ship ferry. That way you could skip the LA traffic and when you got off, you'd have your car.