MAXED OUT: Welcome to San Diego

What's the latest on the beer scene here in San Diego? We'll allow brother Maximus to let you all in on the recent goings-on.


What’s new in the world, you crazy kids? San Diego breweries, that’s what’s new. We all know that San Diego is saturated (in a good way)with breweries, from Alpine to Stone, Port to Alesmith, San Diego Brew Co. to Mission. Why not throw in a few more! Fine by me. In the next few months we will be adding a few more to the list and I
couldn’t be more excited.

One of the more popular beer bars in San Diego is Hamilton’s, and the
owners of Hamilton’s have recently opened other beer bars in the city,
such as Small Bar and Bar Eleven. Well a couple of weeks ago they
added their 4th entry into the San Diego beer scene in the form of
Monkey Paw on the corner of 16th and F downtown. It took over the spot where The Jewel Box used to be, just a few blocks away from El
Dorado and San Diego City College. 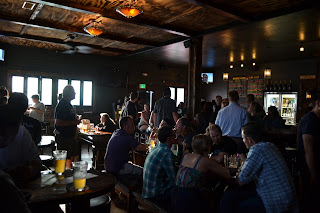 Of course I had to check it out
for research for y’all, so this past Monday I stopped by for a couple.
It was nice. They have a limited food menu, the usual suspects on the
beer list (very similar to Small Bar and Hamilton’s) as well as hard
liquor and a decent bottle list. To tell you the truth, it’s pretty
much a total combination of Small Bar and Hamilton’s. Oh, and what I
have yet to mention is that they have already begun brewing their own
beer. I don’t have any deets on when they will be tapping their first
tasty brew, but it should be pretty soon. So stay tuned cuz this
guy’s gonna be the first ta letchya know.

Lee Chase is a former assistant brewer for Stone, and the current
co-owner of Blind Lady Alehouse, down on 35th and Adams, which is a
pizza joint and great beer house. The concept of Blind Lady is
freakin’ fantastic! PIZZA AND BEER! HAZAAAAA!!!! Execution? Holy
crap, did they miss the boat on that one. You’d think it easy, right?
Pizza and beer, how do you eff this one up? Welp, they did. Don’t get
me wrong, the place is always freakin’ busy as hell. You just won’t
find a tall, handsome, blonde guy named Max (it’s me) in there. Pizza
is too salty and “artisanal” with like fennel and truffle oil and
shitaki like that. A brotha can’t just get a freakin’ slice of pep?

Oh, and don’t get me started on the ordering process. JOKE! I
digress. The aforementioned co-owner, Mr. Lee Chase, is one of the
younger brewers out there with a ton of talent. He has recently been
brewing in the back of Blind Lady, and his “brewery” is called
Automatic. I haven’t had the chance to check out any of his beers
yet, but the reason that I’m adding him to the new breweries
thingamajigger is because he’s opening a new bar and restaurant on the
corner of 30th and El Cajon Blvd. I hope it’s a departure from Blind
Lady and am unsure of the name as of it at this moment but once again, I’ll
keep y’all posted. Oh, and they are to have Automatic beers on on the
reg.

Finally we come to the juicy goosey. El Cajon Brewery, coming soon to a theater near you. Or is it? Sos there is so much to say here
that I’m going to take a deep breath. One moment please...

...Ok, I have collected my thoughts. Thank you for your patience. El
Cajon Brewery has been “almost open” for about a year now. Some two
or three months ago the Mayor of El Cajon even gave them some 350,000
dollars to assist in the opening. Never mind the fact that the Mayor
of El Cajon is the father of the owner. PAY NO ATTENTION TO THE MAN
BEHIND THE CURTAIN!!!!!!! So any day/week/month now there will be a
brand new brewery in the heart of El Cajon! Really? That’s where you
want to open a freakin’ brewery? Okie dokie! I have heard a couple
of different things on their beer. I have heard that they are opening
with 40 drafts, 18 of them being their own beer. I have also heard
that they are opening with 40 draft beers and only a couple of them
being their own to start. Either way, get on down to good ole
downtown El Cajon sometime before 2015 and there might just be a new
brewery! YAY!!!

Thanx for joining kiddos! I’ll keep you posted on when these three
places open/start producing beer, and of course I’ll do some of the
research for you and let you know if they’re worth checking out. I
know, I know, I’m a giver. Comments below, Facebook, email me at
maxamilliondollars@gmail.com.

Until next time my beer loving brethren, have a damn beer for me! Or two!

(ed. note: There was an extensive article in the San Diego Union-Tribune a few weeks back on the redevelopment efforts of downtown El Cajon questioning the wisdom of pouring so much public fundage into that area. They even specifically mentioned El Cajon Brewery but amazingly, neglected to report out on the Mayor-son angle... agree with Max on Blind Lady - the communal, Pizza Port-like picnic table set up is cool but they're way too geeked-out on the food. The pizzas are just terrible. It's like licking a salt cube and what's really artisanal about that?.... Monkey Paw is the anti-El Cajon Brewery. You heard just a quiet buzz about the place and then, boom! ... they're open for business, pouring beers and slingin' hash over the transom.)