What is wrong with this guy? 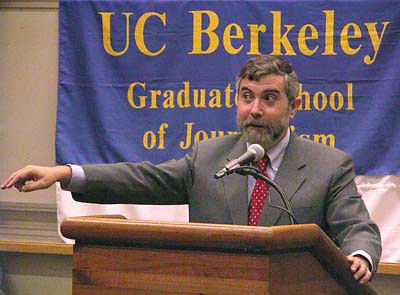 On a day of remebrance, reflection and unity, here is what the New York Time's Paul Krugman decided to put down on his blog yesterday:

Is it just me, or are the 9/11 commemorations oddly subdued?

Actually, I don’t think it’s me, and it’s not really that odd.

What happened after 9/11 — and I think even people on the right know this, whether they admit it or not — was deeply shameful. The atrocity should have been a unifying event, but instead it became a wedge issue. Fake heroes like Bernie Kerik, Rudy Giuliani, and, yes, George W. Bush raced to cash in on the horror. And then the attack was used to justify an unrelated war the neocons wanted to fight, for all the wrong reasons.


In Krugman's alternate universe, the solemnity of yesterday's commemorations had less to do with the loss of life and the shock and horror of an attack on our nation's soil, the likes of which have never been seen, and more to do with what Krugman perceives as a tacit acknowledgement of bad behavior in the wake of 9-11. Uhh, yeah.

"Fake heroes"? Who was calling these men heroes to begin with? Regardless of what you think of these convenient-to-be-Republicans, it was generally agreed that those men provided a healthy degree of much-needed and steady-handed leadership in the immediate aftermath of 9-11 to where even a wing-nut like Rosie O'Donnell was singing President Bush's praises before reverting to default Truther wing-nut form.

But "heroes" is a grossly misleading straw man since most everyone agrees that showing strong leadership in a crisis situation does not qualify for "hero" status rather knowingly putting yourself in harm's way even at the risk of death in order to come to the aid of another. 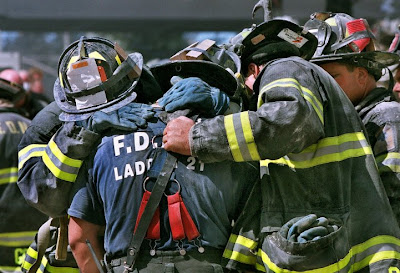 We imagine Krugman knows this all too well, which makes his attempts to air partisan grievances on 9-11 all that more pathetic.

How sad. On a weekend where most of the nation was enjoying late summer/early fall weather and reveling in the first full weekend of college and professional football and yet also taking in very somber and moving 9-11 commemorations, Krugman decides to set finger to keyboard to generate that blog post. Contrast that with the grace and dignity that both President Bush and President Obama (who visited all 3 attack sites yesterday: Shanksville, PA, Washington D.C. and Ground Zero in New York City) handled the ceremonies yesterday. What a sad, bitter, little man Krugman is.

He is a nut, that is why the communists that run the nobel prize attempted to bolster his and Obama's credentials. They are destructive forces in America.

He is just butt hurt those nasty Republicans did a good job keeping the country safe after 9-11 and silenced fellow Libs. He's an idiot.