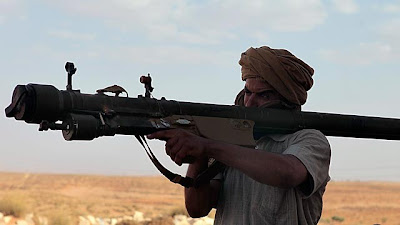 A potent stash of Russian-made surface-to-air missiles is missing from a huge Tripoli weapons warehouse amid reports of weapons looting across war-torn Libya.

Peter Bouckaert, Human Rights Watch emergencies director, told CNN he has seen the same pattern in armories looted elsewhere in Libya, noting that "in every city we arrive, the first thing to disappear are the surface-to-air missiles."

He said such missiles can fetch many thousands of dollars on the black market.

"We are talking about some 20,000 surface-to-air missiles in all of Libya, and I've seen cars packed with them." he said. "They could turn all of North Africa into a no-fly zone."

The lack of security at the weapons site raises concerns about stability in post-Gadhafi Libya and whether the new NTC leadership.

The lack of security at the weapons site raises concerns about stability in post-Gadhafi Libya and whether the new NTC leadership is doing enough to stop the weapons from getting into the wrong hands.


And check this out:


Having known about this problem 6 months ago coincides with the beginning of our involvement to topple the Gaddafi regime.

Kind of makes the looting of Iraqi museums for artifacts and antiquities seem like small potatoes, now doesn't it?

Yellow Cake, too I heard. Hey, with 20,000 missing surface-to-air missiles I'm sure NOTHING will go wrong.