Great moments in the history of crony capitalism (UPDATED) 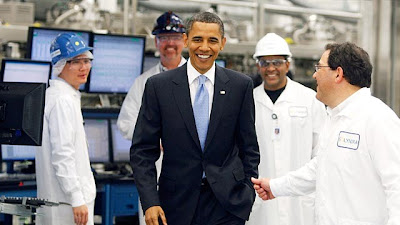 please scroll down for update...

Entrance observation: Over $500 million in loan gurantees at near-zero interest rates and they still couldn't make it work tells you pretty much all you need to know about the current competitiveness of green technology.

A politically connected solar company that pocketed a half billion dollar government loan, only to shut its doors, fire workers and file for bankruptcy, benefited from a series of breaks in securing the federal funds -- including an interest rate lower than other green energy projects, iWatch News and ABC News found.

The $535 million loan to Solyndra Inc., issued by the U.S. Department of Treasury's Federal Financing Bank, included a quarterly interest rate of 1.025 percent, the government bank reported in July. Of 18 Energy Department loans cited in the bank's report, Solyndra's rate was lowest. Eight other Energy Department projects, each also backed by the Federal Financing Bank, came with rates three or four times higher, the report shows.

That treatment is in keeping with the history of the loan to the California solar panel maker, an arrangement inked in September 2009 with great fanfare -- and touted, not long after, during a factory visit from the president. Monthly government bank reports filed since then reveal Solyndra's rate as the lowest for any energy-related project in nearly every report; in every case its rate was well below that of most energy projects, which ranged from cutting-edge electric car makers to wind and solar ventures.

The Department of Energy and Solyndra officials begged to differ saying the loan from the bank and its terms were based upon a formula and hard data such as when the loan was granted and the length of the repayment period. That would appear to be at odds, however, with evidence that Solyndra may not have been such a solid bet.

But records show the advantageous terms came in spite of red flags about the risks of investing in Solyndra. In 2008, as the loan agreement was moving forward, an outside rating agency gave the deal with a B+ grade, a less than optimum score, according to records obtained by iWatch and ABC under the Freedom of Information Act. That same year, the records show, Dun & Bradstreet assigned the company's credit appraisal as "fair."

And about that Federal Financing Bank?

The Federal Financing Bank, created by Congress in 1973 as a part of Treasury to reduce the cost of borrowing, referred questions about the Solyndra loan to Treasury. "We don't talk to journalists," a Bank employee told iWatch last week.

And now the money shot you've all been waiting for:

Solyndra's most prolific financial backer is George Kaiser, an Oklahoma oil billionaire who was a bundler of campaign donations for Obama's 2008 race. Kaiser's Argonaut Ventures and its affiliates have been the single largest shareholder of Solyndra, according to SEC filings and other records. The company holds 39 percent of Solyndra's parent company, bankruptcy records filed Tuesday show.

Under terms of the bankruptcy filing, investors including Argonaut -- which led a $75 million round of financing for Solyndra earlier this year -- will stand in line before the federal government and other creditors.


Questions have long persisted about why Obama chose Solyndra to be the first green energy company to benefit from the federal loans program. In May, iWatch and ABC reported that the Energy Department announced its commitment to back Solyndra without first receiving full marketing and legal reviews. That shortcut drew criticism from government auditors, who accused DOE of favoring some applicants, like Solyndra, over others.


As would be expected, Kaiser is staying mum on this whole deal.

So, if you're scoring at home, you have over a half billion in federal loan guarantees largely up in smoke, 1,000 jobs neither created nor saved and most likely, a congressional investigation into an apparent sweetheart deal for a heavyweight Presidential donor.

(UPDATE #1): Thank god for bridges, roads and choo-choo trains because we don't think the President will be talking a whole lot about green jobs tonight in his jobs speech.

Agents arrived at Solyndra at 7a.m. and were examining the factory. Solynrda has a skeleton crew of 100 workers on the scene, who are closing the factory down.

"It's been an interesting [two weeks]" says Solyndra spokesperson Dave Miller, referring to both the bankruptcy and the FBI raid. "I don't know what they're looking for...but I haven't seen them take anything."

Solyndra filed for bankruptcy last week, shocking both workers and the Obama administration, which had given the startup $535 million in low interest loans.

The announcement was a devastating blow to Mr. Obama who is set to deliver a speech on job creation Thursday evening.

Congress has demanded a hearing into the matter. Wednesday the company was reported to be for sale.

There are no reports of any arrests at this time.

Solyndra officials made numerous visits -- 20 -- to the White House, according to logs and reporting by The Daily Caller.

Solyndra officials in the logs included chairman and founder Christian Gronet and board members Thomas Baruch and David Prend, according to the Caller.

OK, here's the part where we are going to sound totally paranoid: Wow. That didn't take long. Mere days after filing for bankruptcy the FBI comes swooping in. Really? We're all for quick action and everything but considering who the FBI ultimately answers to, we can't help but think this is all a little too good to be true. Totally paranoid, right?

Just going to say that...

Cover your A much Mr. President? Good luck on this one...