Bill Keller has a very important message for you 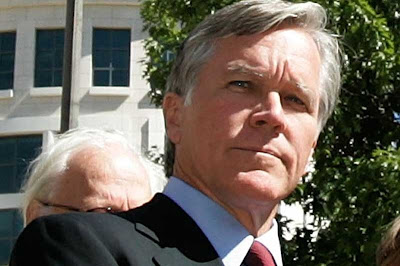 The New York Times former editor-in-chief and now, uhh, current Op-Ed columnist did some heavy thinking over the weekend to come up with the reasons for the decline in Obama's political fortunes.

You may be shocked to find out that the person of George W. Bush leads off Keller's gang of four, followed quickly by those diabolical saboteurs that have taken over the Republican party:

Another toxic legacy of the Bush years is an angry conservative populism, in which government is viewed as tyranny and compromise as apostasy. The Tea Party faction has captured not only the Republican primary process, but to a large extent the national conversation and the legislative machinery. In Congress the anger is pandered to by Republicans who should know better, since their nihilism discredits not only the president they have cynically set out to make a failure, but their own institution. Voters are frustrated by this — Congress has the approval rating of bedbugs — but it remains to be seen whether the electorate will punish the real culprits or simply reward the candidates who run against that bogeyman, “Washington.”

That first sentence is confusing: Is that angry conservative populism a result of what the legacy media perceived as the hyper-conservatism of the uncouth Texas-bred Bush or is it as a reaction to what many conservatives and libertarians saw in Bush as too willing to play fast and loose with privacy rights in the name of the War on Terror and perhaps more importantly, the antithesis of fiscal restraint with his spending and what turned out to be his corporatist/bailout ways at the onset of the financial crisis of 2008? Given what we know about the legacy media, we imagine know it is the former.

But beyond that, this paragraph is simply unreal. Prior to the 2010 midterms, Democrats held solid majorities in both the House and the Senate for four years and for the last two years prior to the midterms they held the Oval Office as well. Precisely what was it about the electoral landslide of 2010 as a repudiation of the Democrats' failed statist policies does Keller not understand? Did he think that the turnover of parties in the House and the six seat pick-up by the Republicans in the Senate was a sign that the electorate wanted more of the same failed statism? What did he not get about the 2010 midterm results?

It's called a representative republic and every two years, the country gets to grade, in a sense, the performance of those they sent to Washington. And in 2010, the personnel of that D.C. line-up and what they implemented policy-wise, everything from Porkulus to ObamaCare, got a spectacularly failing grade. The public figured Keynesian gimmickry didn't work with the economy and taking away more autonomy in personal health care decisons and doing so in series of crass and cynical backroom deals, bribes and kickbacks was not the direction they wanted to take the country.

Keller moves along to disenchanted liberals before arriving at Obama himself. Well, not really Obama himself, rather your perception of the man.

To be disillusioned you must first have illusions. Some of those who projected their own agendas onto the slogans and symbols of the Obama campaign were victims of wishful thinking — fed by Obama’s oratory of change. Anyone who paid attention while candidate Obama was helping President Bush pass the 2008 bank bailout should have understood that beneath the rhetorical flourishes Obama has always been at heart a cautious, cool, art-of-the-possible pragmatist. When he sees that he lacks the power to get what he wants, he settles for what he can get.

Yeah, he wrote that. The former HMFIC of the nation's paper of record and which was at the forefront of the shameless bootlicking and hagiography of candidate Obama wrote that. Is there any sort of critical self-assessment with these people at all? At all?

There was more about Obama being a "shape-shifter" and not being able to define himself (in Placentia, California, that's translated as not having any core values) and how Keller actually prefers a little ambivalence in his President as opposed to the "blinkered certitude" of he who was not named as the implied axe-grinding would've made it wholly redundant but we stopped because we just couldn't take it any longer.

That Keller may not like conservatives and/or disagree with conservative policies is one thing, but to appear completely clueless as to the reasons for the President's dismal political fortunes is entirely another.

Saw the same article and was as amazed as you. I loved this quote "Republican resistance amounting to sabotage." Are you kidding? Obama piled up a filibuster proof Senate majority and a huge House majority, and this joker blames Republicans?

I love it when the left blames the tea party movement. They just keep offending large segments of the population and attack a bogeyman who is not actually on the ballot, not even as a "party."

There is no "Party", only a state of mind, my brother.

For a different take on the Obama administration problems (from a Canadian) see this article over at CDR Salamandar.

O@H, I saw that over the weekend. Thanks for sharing it here.

How did Hacksaw insert himself into the discussion?