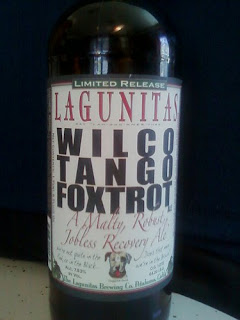 B-Daddy questioned how it is we get to the point when he's scooping us on beer-related news, particularly when it has conservative overtones.

Lagunitas, an outstanding brewery out of Northern California features, how shall we say this, somewhat herbally-inspired rants/stories in fine print on their labels. However, they get a little more topical if no less meandering with one of their beers. Their Wilco Tango Foxtrot: a Jobless Recovery Ale contains the following on its label:

'In the murky realm of things that make you go Hmmm… 2010 may rank way, way up there. From the curious per curiam decision of 531U.S98 to WTC7, to the Superdome, to the Fall of the House of Lehman, to the Novel President’s Afghan Expedition escalation, to the oxymoronic Jobless Recovery of 2010, we have been confused. So, we did the only thing we could- we made beer-and lots of it. 6,420 cases of it to be exact. As far as we know, you drank all of it. Thank you for that, because if you had not we would have been looking for a bailout of our own, and we haven’t heard of any breweries either needing or receiving any of those Yuan-flavored TARP dollars… although we have read that the Las Vegas adult video industry did. Nobody knows why. So, in a world that is once again the proverbial ‘Ball of Confusion’, craft beer alone seems to carry its own weight. It’s nice to be on the winning team and thank you for your friendship and imbiliciousness. Call us! 707-769-4495 CHEERS!'

Could not have said it better ourselves.

Quick note about the name of the beer: Federal law prohibits naming a product that which is not actually contained in the vessel. Hence, "Wilco" instead of "Whiskey".

Lagunitas proprietors happen to be big fans of the alt-country band Wilco who several years back produced the album, Whiskey Tango Foxtrot so the symmetry became an undeniable force in the whole scheme of things.

It's a sunny, summer Friday afternoon and this is why you have us around and why we appreciate your all's readership.

I thought the correct grammar was y'all. If you are referring to multiple groups of people, then the plural is "all y'all."
B-Daddy, your unofficial BWD ombudsman, heck everything I do is unofficial.