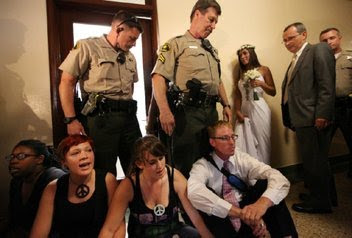 In the process of having to overcome our alleged homophobia with respect to the gay marriage debate we will also be required to confront an even more daunting task: overcoming our jerkophobia.

On the day hundreds of gay and lesbian couples statewide planned to obtain their long-awaited marriage licenses, a crowd of about 50 people gathered at the county clerk's office Thursday to protest a federal judge's stay of a federal ruling that Proposition 8 is unconstitutional.

Three people were taken away in plastic handcuffs by sheriff's deputies early in the demonstration and an additional six people were removed later. A deputy said they were detained for blocking access to a county office.

Being the true good government liberals we are, we're compelled to ask why every damn one of these people were not arrested for interfering with the county's obligation to do the business of the people?

Our jerkophobia is highly unwarranted given what else transpired yesterday at the San Diego County offices.

Three heterosexual couples approached for their scheduled appointments this morning. The group refused to move and allow the couples access to the office.

One wonders if high chairs, broken bowls of porridge, banging on plates and hysterical sobbing were not also involved.

Stop the H8, Prop 8 donor Google maps, county office sit-ins, physically blocking people from getting married... don't know who it is that is advising these people but we cannot ever recall a more loathsome overall P.R. strategy that has done more to turn off people that might possibly be talked into siding with them.

Plastic handcuffs? Sounds like just another rip-off by Big Oil.