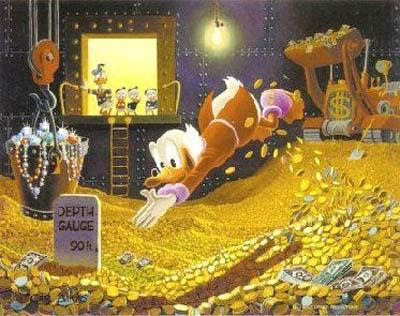 L.A. Times columnist not quite grasping the reality of the current economic landscape:

Corporate America, it's time to spread the wealth

Businesses are sitting on a record hoard of cash, but they're not using it to hire workers or pay existing ones better wages. Broadly distributing the fruits of economic growth is the only way to sustain that growth.

Michael Hiltzik hits on the fact that non-financial institutions in this country are setting on record amounts of cash and wonders why they are not lavishing it upon their workers or on new hires.

Because frolicking in their respective vaults and having pillow fights with the cases filled with green backs is what big business fat cats like to do. Seriously... this is what they live for. Instead of participating in the economy, producing, innovating and generating the profits that got them to where they are, they welcome recessions where they can just sit on the sidelines and not produce and not innovate, rather doing backstrokes through the sea of cash they've built up around them.

It never dawns upon Hiltzik that the reason this may be is because of the economic uncertainty that is 2011. 2011 that will see the end of the Bush tax cuts and the further encroachment of the administration's regulatory regime via ObamaCare and the potentiality of energy bills and more Keynesian hocus-pocus that will only lengthen or worsen the current recession.

Yep, those fat cats got to where they are precisely because they didn't hire employees and weren't vigorous participants in the economy. Just ask health insurance providers.

Hiltzik is a washed-up old leftist hack who got busted for sock-puppetry in 2006.

The Times took him back because they are ideological soulmates.

Great post, but I have to admit, I didn't go over and read the source material. Thanks for doing that nasty job for us.