Headline and sub-headline of the day (UPDATED) 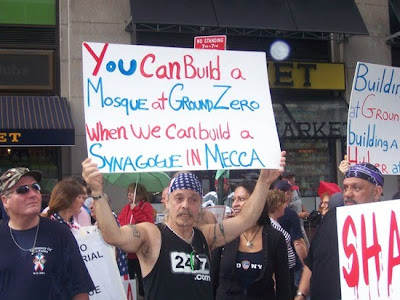 Some can't understand the fuss over a house of worship and how a democracy promoting religious freedom could even be having such a debate. Others are offended at the conflation of the 9/11 attacks with all Muslims.

We realize that it's the height of the political silly season currently in these dog days of August but is it really too much to ask this nation's political left and the Arab "street" to wrap their brains around the notion that one can accept that there is nothing legally-speaking that can or should be done to prevent a Muslim community center from being built two blocks from Ground Zero while simultaneously believing that this same community center would better serve its alleged intent of tolerance and understanding by being built elsewhere?

It isn't but for the American left it's brutally obvious that this is simply about misrepresenting the views of those opposed to building this community center, mosque, whatever, at that particular location.

So, it's come to this: a completely natural, understandable and visceral response by 67% of New York City residents is proof-positive of this country's Islamophobia.

Unfortunately for the left, however, and similar to the Arizona illegal immigration issue, it's tough for your false narrative to gain much traction when you are on the losing side of a 70/30 hot button issue... particularly when prominent members of the left's own team like Harry Reid and Howard Dean as well as the hottest Muslim in the nation desire the mosque to be built elsewhere.

It slays us that the L.A. Times can run that article with a straight face. Maybe when the broader Muslim world gets serious about purging the extremist elements from their ranks, we'll actually start paying attention to rebukes with respect to religious tolerance and understanding.

And given the deliberate misrepresentation of mosque opposition by the left, who is it that really needs a lecture on tolerance and understanding?

And since when did critiquing a religion or aspects of a religion become synonymous with "hatred". When same-sex marriage supporters demonstrated in front of the large Mormon temple in University Town Center last year, that was simply American-as-apple pie flexing of 1st amendment rights, was it not?

As this whole mosque debate neatly illustrates, though, the American left is highly subjective when it comes to the practical application of the 1st amendment.

So, just in case there is any doubt as to where we and we believe most Americans stand on this:

By all means, build your mosque; but please, strongly consider a different location

My position? I oppose the idea of a mosque at that site, but I also oppose action by government to stop it. I will applaud every protest at that site if the center is built. However, it falls into the category of lots of other things that I oppose, but refuse to support state suppression of, because granting the state the power to correct the problem I want solved inevitably leads to a long string of abuses of that very power. I don't like pornography, swearing, fools on motorcycles who don't wear helmets, cigarettes, fools in cars who don't wear seat belts, marijuana, and generally anything inspired by hippies. But in a free society, we put limits on the power of government to correct these ills, because the cure is truly worse than the disease.

Part of what is central to the concept of American exceptionalism is that the 1st amendment simultaneously allows for both the building of the mosque at Ground Zero and the ability to protest against building that mosque there. The concepts of freedom of religion and freedom of dissent in this country make this position fully consistent.

This location is holy ground for the jihadists. Why the vehement stubbornness to move? KT Cat was correct; this is a finger in our eye. They enjoy our protests.

While the moderates may agree it is in bad taste, they are also infidels. They are after all, moderates.

Have you ever read the Koran? It's next up on my audible wish list.

Dean,
I'm with you on this. See my post. Yes it is a provocation, but we can handle it.