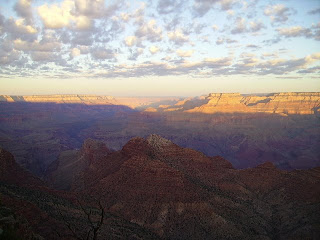 One of the really great things about road trips is some of the 0dd-ball stuff you come across in open country.

Last October, I sat on the rim of the Grand Canyon for my first time ever, contemplating the immensity of it all. Half an hour in to my quiet meditation of it, a very strange looking bus with an even weirder trailer in tow behind it rumbled into one of the several parking lots you can pull into as you travel the length of the canyon's south wall. The occupants of the bus got out, dressed all in black as if they had somehow become lost on their way to their gig as Depeche Mode roadies. This was obviously very distracting to my stated goal of soaking in the majesty of the greatest hole on earth.

But soon enough, the occupants broke out some very basic music instruments -- think Sheryl Crowe's band on "Tuesday Night Music Club" -- and started playing a very folksy tune over and over, with the female lead vocal whirring out some incomprehesible lyrics at a semi high-pitch. The third time they played it, I was actually humming along and realized it complemented my visual of the canyon quite nicely -- almost the musical version of their handing me a wine glass filled with a red of a spicy boquet that suggested a fine merlot.

A guy from the group came up to me somewhat apologetically, as if he realized what the Canyon experience was supposed to be like (Quiet!!), and explained they were making a movie called "The 1 Second Film", and handed me a little laminated post-card flyer explaining the project. Sure enough, upon my further examination, they had been filming the band playing in front of the Grand Canyon. Being as polite as he was, I didn't refuse his request that I move over a few feet to get out of their shot. They also took a photo of me holding the post-card with the canyon in the background -- something they have done thousands of times over across the country as part of their promotion. (I searched their website for the photo, but have come up empty thus far)

Several months have gone by now, and while doing a bit of house cleaning this morning, I found the little post-card they gave me. It lead me to find out if they had posted anything on YouTube to promote the project. They have: http://youtube.com/user/the1secondfilm?ob=1

Now, I don't know if anything is ever going to come from this project. I still don't even have the slightest idea about what the "1 second film" is about, nor it's 1 hour documentary superimposed during the credits. But the thing is tangentially backed by my stunt-double, Pierce Brosnan, as well as Kevin Bacon, Stephen Colbert, and on down the line. So if it does hit it big, I just want to take credit for being behind the bus at the 2:14 mark in the YouTube video -- the shot of the Grand Canyon.

Checked it out, not the most brilliant play, but lookit the "flavor of love" so what the heck? In the age of 'reality' TV, what's next?