You thought you voted for a conservative? 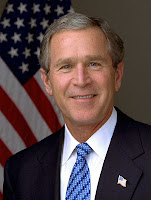 B-Daddy here. Many of us bought into the idea that the man at left is a conservative in the Goldwater tradition. However, the actions of his administration once again give the lie to this notion. The man pictured at right is the Solicitor General of the United States, Paul D. 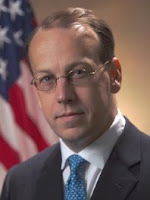 Clement. He filed a brief with the Supreme Court arguing against an individual rights interpretation of the 2nd amendment that the Second Court of Appeals used to strike down the D.C. gun ban. Why does this matter? Because if the D.C. law is declared unconstitutional, per se, then the burden of proof will be on government, where it always should have been, to show how regulation of gun ownership does not interfere with a fundamental right. Ironically the Goldwater Institute opposes the administration interpretation as well. Their criticism is far more eloquent than mine:

"This brief addresses the government’s failure of principle and logic in this case. The United States’ brief (hereinafter “Gov’t Br.”) argues correctly that the Second Amendment protects a fundamental personal right to keep and bear arms, but then fails to acknowledge and advocate the simple and necessary conclusions that follow from that premise."

However, Bush, either through disorganization or apathy has allowed his Solicitor General to file a brief that argues for a more restrictive interpretation of the 2nd amendment. Amazingly, Vice President Cheney has signed on to an amicus curiae brief that argues against the position of the administration's own official. Unbelievable.

Like his signing of McCain-Feingold, or NoChildLeftBehind or caving on steel tariffs, or generally just letting pork run amok, this administration has not been all that conservative. No wonder people are abandoning the Republican label.

I didn't think I voted for a conservative, I voted to keep Al Gore and John Kerry out of office.

Very specifically to keep John Kerry out of office.

Lump into the equation the cronyism and some buffonery, I keep hoping the Republicans can do better.

Now I just watched Obama's speech regarding Rev. Wright. It was brilliant. I'm not sure that McCain has the charisma to beat this guy, even if he beats him in the arena of ideas.

Funny, but the reviews of his speech seem to be running 50-50. That surprises me because the little bit I saw was well-delivered, even though I hated it before it even started.

If I recall, Mitt Romney's speech, which I hated as well, was universally well-received.

Maybe I've been too simplistic in not wanting to engage in Talmudic grammatical parsing of the language of the 2nd amendment but my defense has always been: what is it contained in the 2nd amendment that prohibits individuals from owning guns?

Dean,
I agree with all, except for the fact that Cheney signed the amicus brief that runs counter to Clement's arguments. How very odd indeed that a sitting Vice President would sign a court brief at odds with the President's Solicitor General. If this administration wasn't so incompetent such an outcome could have been easily avoided.

I found brilliance in the eloquence and in the manner he presented his case.

I'm sure that for most people that disagree with him, could pick it apart, or state that it was too little too late, especially the part where he admitted being in service when prior it was denied.

I viewed it much more objectively, knowing he was in a pickle with the situation. I admired him for not disavowing his pastor. I thought the comparison to his grandmother was impressive, even if it were a bit of a stretch.

I also thought is was smart for him not to apologize. Nothing looked more UN-presidential than the contiuous loop of Hillary's recent string of apologies played on the news and AM radio.

As for how it was recieved, I wonder how MLK's or JFK's great speaches were recieved at the time by their adversaries.

I also don't think Mitt was in the same pickle that Barack had.

Dean,
Talmudic grammatical parsing????
I've got to find a way to use that in an insurance report.

But I was also confused about this case regarding the hairsplitting. Perhaps someone would be able to direct me to a link that summarizes it in English.