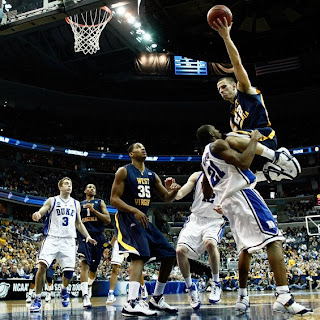 The next best thing to Belmont taking down Duke on Thursday would be West Virginia doing the deed themselves against the Blue Devils which they did, winning their second round match-up 73-67… and it really wasn’t that close as Duke hit a couple of late 3s to cut into a 14 point deficit. West Virginia was in control pretty much the entire 2nd half after falling behind by 5 at half-time. Box score here. Biggest stat, of course: Duke, a dreadful 5-22 from behind the arc.

Around the 8 minute mark with Duke trailing by 6 announcer Bob Wenzel felt compelled to tell us “the team in the white shirts (Duke) is really going to start showing some heart, here”. This is representative of the template for announcers and the sporting media as a whole we’ve heard for years now with respect to the Duke program that we can’t help but feel is codespeak for: "the undermanned, floor-slapping, gritty little white kids at Duke won’t ever go down without a fight. " Unfortunately for Duke, West Virginia’s whiteness rivaled that of Duke’s and from that point on WVU took Duke to the woodshed beating their brains out on the boards and coming up with seemingly every loose ball.

So…. what’s up with the Dookies? Another early round exit for another pedestrian, athletically-challenged, Coack K squad. We remarked in an email to a friend last March that Coach K was going to be the next Coach Bobby Knight (Bobby Knight coached Coach Kryzezewski at Army). What we meant by that was the success that both coaches experienced at the height of their career dictated thereafter, we believe, their philosophy towards how they ran their program and thus the type of player they recruited.

This post is running long already so we’ll break it off and come back to finish our thoughts in a Pt. II later in the tournament.

…and for those of you who have been living under a rock, here is the game-winner and most significant two-points in the history of basketball in San Diego. Mongo, an Aztec alum was begging for this.