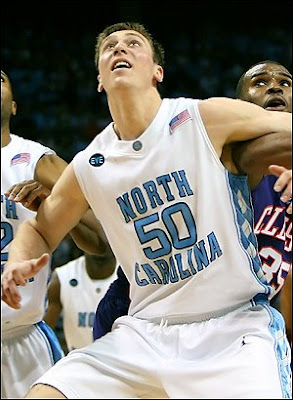 Just a few initial thoughts on the NCAA basketball tournament field that was just set about 2 hours ago (bracket here):

Surprisingly little bitching about who got in and who was left out which had become a Selection Sunday cottage industry of late. Even Billy Packer was very civil towards selection committee chairman Tom O’Connor on CBS’s selection show.

The two teams that were the subject of most discussion as to who got jobbed were Virginia Tech and Arizona St. Seth Greenberg, the VaTech coach was on ESPN pleading his case and gave a nod towards possibly expanding the tournament. We’ve heard more of this noise over the past few years and we sincerely hope it goes away because it solves NONE of the problems it proponents claim it will fix.

The pro-expansionists' strongest plea is that seemingly deserving teams like VaTech and ASU will be granted admittance to the Big Dance. Okay. Then what about that team that feels they are just as worthy as VaTech and ASU who gets left out…. what about them? Point is, there is ALWAYS going to be a team that feels they got screwed no matter how many teams you let into the tournament. As it is, the consensus this year was that this was the softest bubble in many years, meaning those teams on the bubble, quite frankly weren’t that good and probably would not stand a chance of even being considered in years previous.

Also, the field of 64 (plus 1… don’t ask) is nearly perfect in its symmetry. 2 rounds in the first long weekend followed by 2 more rounds in the sweet 16/Elite 8 long weekend and then the Final Four weekend after that. Why would you want to mess with the best tournament in all of sports? No. There is no tweaking you can do to it to make it any better, so just knock it off, will ya?

Back to Arizona St. for a moment: Its ironic that one of the last teams “out”, a team from the conference that many feel is the best in the land got bumped out by Georgia, a conference tourney winner from a conference that was most certainly down this year.

Apparently, there is something that Duke can do to not play their first round games in the state of North Carolina: lose to Clemson in the ACC tourney semis as they did yesterday. Duke who had the #2 seed in the Midwest Region locked up and first and second round games in Raleigh got shipped off to Washington D.C. as a #3 seed in the West Region.

The dreaded 5/12 upset: Possibilities abound! 5 Notre Dame/ 12 George Mason, 5 Clemson/ 12 Villanova, 5 Drake / 12 Western Ky., 5 Michigan St. / 12 Temple. One of those 5 seeds is going down. It’s a given… but which one? George Mason knocking off Notre Dame would please us the most but Michigan St. fits the 5/12 upset mold of power conference team that has played inconsistently all year that gets bumped off by a hot mid-major team.

That’s all for now.